While shepherds watched their flocks

While shepherds watched their flocks by night, All seated on the ground

1 While shepherds watched their flocks by night,
all seated on the ground,
an angel of the Lord came down,
and glory shone around.


2 "Fear not," said he for mighty dread
had seized their troubled mind
"glad tidings of great joy I bring
to you and all mankind.


3 "To you, in David's town, this day
is born of David's line
a Savior, who is Christ the Lord;
and this shall be the sign:


4 "The heavenly babe you there shall find
to human view displayed,
all simply wrapped in swaddling clothes
and in a manger laid."


6 "All glory be to God on high,
and to the earth be peace;
to those on whom his favor rests
goodwill shall never cease."

Nahum Tate was born in Dublin and graduated from Trinity College, Dublin, B.A. 1672. He lacked great talent but wrote much for the stage, adapting other men's work, really successful only in a version of King Lear. Although he collaborated with Dryden on several occasions, he was never fully in step with the intellectual life of his times, and spent most of his life in a futile pursuit of popular favor. Nonetheless, he was appointed poet laureate in 1692 and royal historiographer in 1702. He is now known only for the New Version of the Psalms of David, 1696, which he produced in collaboration with Nicholas Brady. Poverty stricken throughout much of his life, he died in the Mint at Southwark, where he had taken refuge from his creditors… Go to person page >
^ top

The story of the shepherds and the angels is told in this famous paraphrase of Luke 2:8-14 by Nahum Tate (b. Dublin, Ireland, 1652; d. Southwark, London, England, 1715). It was first published in 1700 in a supplement to the New Version of the Psalms by Tate and Nicholas Brady. Tate's straightforward telling of the nativity story is an example of paraphrasing at its best: poetry that conveys the text well without undue liberties or additions and is easy to understand and sing. Adopted by virtually all hymnals since its writing, this narrative song simply tells the Christmas gospel as the shepherds heard it. A similarly narrative song based on the same gospel text is at 339.

Although born in Ireland, Tate spent all of his adult life in London, where he was known primarily as a playwright and poet. Most of his dramas were not original plays but adaptations of the works of others. Honored by being named poet laureate in 1692, Tate wrote poetry celebrating important national events. He was also appointed the official royal historian in 1702. Intemperate throughout his life, Tate died while living at the Suffolk House, a refuge for debtors in London, In the history of church music Tate and Brady are known for their New Version (1696), which replaced the "Old Version" of Sternhold and Hopkins published by John Day in 1562. Reprinted frequently and supplemented with some hymns, the new versification became the standard psalter of the Church of England and influenced psalmody well into the nineteenth century.

While shepherds watched their flocks by night. N. Tate. [Christmas.] Appeared in the Supplement to the New Version, in 1702, in 6 stanzas of 4 lines, and in all later editions of the same. In full, or in an abbreviated form, it is found in most hymn-books in English-speaking countries. Original text in the Hymnal Companion. In addition to the original, two additional versions are in common use:—
1. While humble Shepherds watched their flocks. This was given in the 1745 Draft of the Scottish Translations and Paraphrases, the opening stanza reading:—

"While humble Shepherds watch'd their Flocks
in Bethleh'ms Plains by Night,
An Angel sent from Heav'n appear'd
and fill'd the Plains with Light."

The alterations were confined to this stanza. On its adoption in the revised Draft of 1751, and again in the authorized issue of the Translations and Paraphrases, 1781, the concluding lines of the last stanza read:—

Goodwill is shewn by Heav'n to men,
and never more shall cease."

This arrangement of the text has been in common use for more than 100 years.
2. On Judah's plains as Shepherds kept. This is found in one or two American collections only.
The original has been translated into several languages. Those in Latin include; (1) "Pastorum in pecudes noctu vigilante catervâ," by Lord Lyttelton, 1866; and (2) "Noctivagos. acclinis humo, pastoria pubes," by C. S. Calverley, both in L. C. Biggs's annotated edition of Hymns Ancient & Modern, 1867; (3) "Oves dum custodientes," by R. Bingham, in his Hymnologia Christiana Latina, 1871; and (4) "Pro grege Pastores vigilabant nocte silenti," by Bishop Wordsworth (St. Andrews) in his Series Collectarum, &c, 1890.

All tunes published with 'While shepherds watched their flocks'^ top

This rendering of the shepherds' story from Luke 2 is based directly on the account as given in the King James Version of the Bible. Nahum Tate versified it in 1700 and included a few extra details to accentuate some of the facts. While Luke wrote only that Christ was born “in the city of David” (Luke 2:11), Tate emphasized Christ's title “Son of David” in the third stanza – “in David's town … of David's line.” The public ministry of Jesus is also foreshadowed in the fourth stanza; where Luke wrote “Ye shall find the babe” (Luke 2:12), Tate wrote “The heavenly babe you there shall find to human view displayed.”

This paraphrase of the story of the shepherds and angels from Luke 2 first appeared in A Supplement to the New Version of Psalms by Nicholas Brady and Nahum Tate in 1700. It is usually ascribed solely to Tate, though it may have been written as a collaboration.

There are six stanzas, but some hymnals omit the fifth (“Thus spake the seraph and forthwith”). The first and fifth stanzas, as well as the first half of the second, are narrative and describe the appearance of the first angel and then of the host of angels. A paraphrase of the first angel's speech to the shepherds takes up the second, third, and fourth stanzas. The sixth is a doxological version of the song of the host of angels, with some variance in the wording of the second half between different hymnals.

Tate and Brady indicated that their text was to be sung to ST. JAMES, though this recommendation has been ignored. Many old American hymnals used SHERBURNE, but that has also fallen into disuse. Two tunes are commonly used with this text – often both in the same hymnal: WINCHESTER OLD and CHRISTMAS.

When this text is sung to CHRISTMAS, the last line of each stanza must be repeated for the text to fit the music. This tune is also named SIROË because it was adapted from an aria in the 1728 opera Siroë by George F. Handel. This melody was first published as a hymn tune in S. Arnold and J. W. Callott's The Psalms of David for the use of Parish Churches in 1791.

WINCHESTER OLD most likely was adapted by George Kirby in 1592 from Christopher Tye's Acts of the Apostles of 1553, and was published with Psalm 84 in Thomas East's Whole Booke of Psalmes, where it was named SUFFOLK. In Thomas Ravenscroft's 1621 Whole Booke of Psalms, it was named WINCHESTER, after an English cathedral, even though that place had nothing to do with the composition of the tune. Nevertheless, the name has persisted ever since, and it became WINCHESTER OLD to distinguish it from WINCHESTER NEW by Bartholomäus Crasselius.

This hymn is a well-known Christmas song, and can be sung in narrative fashion, with a soloist or group singing the narration, another soloist representing the first angel, and the entire assembly joining on the final stanza to represent the host of angels. The third carol medley in “Follow the Star, Follow the King” features a combination of Tate's hymn set to WINCHESTER OLD with two other Christmas hymns in a narrative function. “While Shepherds Watched Their Flocks” is a sprightly and varied handbell setting of CHRISTMAS. Through five stanzas, different musical techniques are used to keep the tune interesting.

Urania: or a choice collection of psalm-tunes, anthems, and hymns, from the most approv'd authors, with some entirely new; in two, three, and four parts... #192 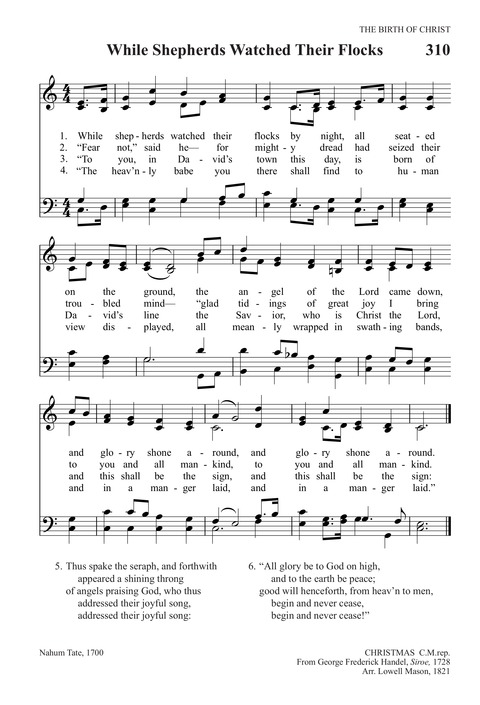 Ancient and Modern #89a

Ancient and Modern #89b

Hymns for a Pilgrim People #114

The Hymnal for Worship and Celebration #135

The Song Book of the Salvation Army #93

The United Methodist Hymnal #236b