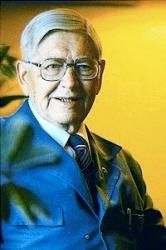 Trygve Alfgeir Bjerkrheim (born 26 August 1904 in Bjerkreimselva, died 27 February 2001 in Oslo) was a Norwegian editor, preacher, teacher and poet. He was born in Bjerkreimselva in Rogaland, but moved with his family to onion in Høland as small and grew up there. Bjerkrheim trained as a cand theol. at the School of Theology in Oslo in 1930 . He then worked as a teacher at Fjellhaug until 1936, but continued as a part-time teacher until 1970. From 1936 to 1970 he was editor of the magazine Perspective (called Chinaman when he was hired), which is the main body for the Norwegian Lutheran Mission. He was one of the founders and leaders of Norea Radio.

As an author, he has written some 15 000 poems and songs that exist in almost all Christian song and hymn books in Norway. He published over 30 books and directed and efforts to translate the new edition of the New Testament (Acta edition). He also translated texts from English to Norwegian, and several of his songs in Norwegian translated into other languages.

It was said that he wrote at least one verse or poem every day to keep the poet alive ability. Much of this ended enough in the trash, but some live on. He also spent the years fountain pen with green ink when he wrote. When he was a guest in underholdningsprogramet "Honor the honorary should" Knut Bjornsen, he presented an ink bottle with green ink - such ink was in fact not obtainable anymore, and the old bard was visibly touched by the gift. There he became the Sigvart Day's performance of his song There is power in the hands folded in the same program.

When Bjerkreim by the year 2000 would crowning "Bjerkreimbu the Century", was Trygve Bjerkrheim won. The prize, a painting hangs today in Bjerkreimselva Council. In 1989 he was awarded Bjerkreimselva Cultural Councils.

Northern Høland Bygdekvinnelag traveled in 2005 one memorial on the onion old cemetery to Bjerkrheim memory. The monument, a bronze relief of Bjerkrheim, a sun and a cross, with the words "He does not allow the glory of life. Erected by friends. Created by Lise Amundsen."