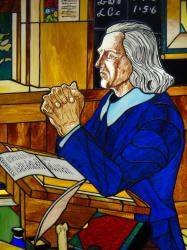 Dock, Christopher. (ca.1698--1771). Mennonite. Came from Germany sometime between 1710 and 1714. Four years later he opened a school for the Mennonite children on the Skippack in Montgomery County, Pennsylvania. On September 28, 1735, he purchased 100 acres in Salford Township nearby and opened a second school, thereafter three days a week in each school. For several summers he also taught a Mennonite school in Germantown. A devout, sensitive lover of children, it was his custom to remain in the schoolroom each day after the children had left and pray for each individually. In this devotion, he was found dead on his kneed in the school one evening in 1771.

His classrooms were adorned with illuminated mottoes from his pen. His method of organizing and conducting a school, Eine Einfältige und gründlich abgefasste Schul-Ordnung was published in Germantown by Christoph Saur in 1770. His Life and Works was compiled by Martin G. Brumbaugh in 1908.

Six of his children's hymns are in the Unpartheiische Lieder-sammlung compiled by S. D. Guengerich in 1892:

Christopher Dock (c.1698—1771) was a Mennonite educator who worked primarily in South-East Pennsylvania. His teaching techniques stood in contrast to the norm of the day, and emphasized character building and discussion in lieu of physical punishment. His legacy lives on in the Christopher Dock Mennonite High School, which bears his name.
Wikipedia Biography
TextsTunesHymnals