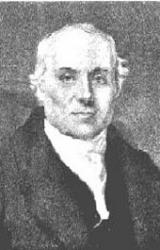 Gadsby, William , was born in 1773 at Attleborough, in Warwickshire. In 1793 he joined the Baptist church at Coventry, and in 1798 began to preach. In 1800 a chapel was built for him at Desford, in Leicestershire, and two years later another in the town of Hinckley. In 1805 he removed to Manchester, becoming minister of a chapel in Rochdale Boad, where he continued until his death, in January, 1844. Gadsby was for many years exceedingly popular as a preacher of the High Calvinist faith, and visited in that capacity most parts of England. He published The Nazarene's Songs, being a composition of Original Hymns, Manchester, 1814; and Hymns on the Death of the Princess Charlotte, Manchester, 1817. In 1814 he also published A Selection of Hymns for Public Worship, appending thereto a large number of his own compositions [Baptist Hymnody, § nr., 2]. The edition of 1882 pub. by his son J. Gadsby contains 1138 hymns, of which 157 are by William Gadsby, and form Pt. ii. of the Selection From his point of view they are sound in doctrine, but have little poetic fervour, and the rhyme is faulty in a large number of instances. Four of these hymns are in Denham's Selection and one in the Selection of J. Stevens. [Rev. W. R Stevenson, M.A. ]

William Gadsby (1773–1844) was an English Baptist pastor. In addition to pastoring, Gadsby planted churches, and was an early leader of the Strict and Particular Baptist movement in England. Although he was not formally educated, Gadsby was regarded by his contemporaries as an excellent preacher and pastor who championed the cause of social justice and opposed the established Elizabethan Church. In 1805 he became pastor of Black Lane Chapel, Strict Baptist church in Manchester, England, and held that position until he died.
Wikipedia Biography
TextsTunesHymnals