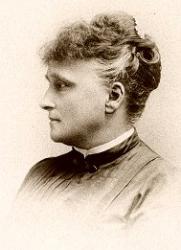 Daughter of Edwin Tyler and Alla Mary Edwards, Sarah married Edward Carrington Henshaw in 1849, in Harrisburg, Pennsylvania. In the American civil war, during which Edward commanded "Henshaw’s Battery," Sarah lived in Ottawa, Illinois. There, she helped organize an aid society and served as its secretary. Later, she became associate manager of the Sanitary Commission in Chicago, Illinois, and was elected to write the history of its work; she called her book Our Branch and Its Tributaries. After her husband’s death in 1872, Sarah moved to California to be nearer to her brother’s estate and her son Edward. The 1880 census shows her living in Oakland, California.