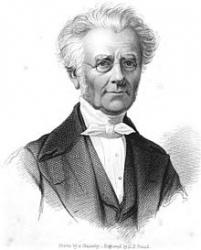 Mogridge, George, commonly known as "Old Humphrey," and as "Peter Parley," was born at Ashted, near Birmingham, Feb. 17, 1787. He was engaged in business for some time, and then removed to London, and devoted himself to literature. His numerous writings were published by the R. T. S. He died Nov. 2, 1854, and his Memoirs were published by the Rev. C. Williams, in 1856. Some of his sacred pieces appeared in his work, My Pocket Book, 1851. One of these, "The Son of God, the Lord of Life" (Praise of Jesus), is in Spurgeon's Our Own Hymn Book, 1866.

George Mogridge ("Old Humphrey") (17 February 1787 – 2 November 1854) was a prolific 19th century writer, poet and author of children's books and religious tracts. He is chiefly known by his pseudonym of 'Old Humphrey', under which name he published 46 works, but also used the pen-names 'Jeremy Jaunt', 'Ephraim Holding', 'Peter Parley' and 'Old Father Thames'. He wrote approximately 200 published works, many of which are still in publication today, and at the time of his death it was estimated that over 15 million copies of his writings were in circulation.
Wikipedia Biography
TextsTunesHymnals