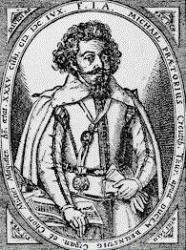 Prätorius, Benjamin, son of Andreas Prätorius, pastor at Obergreieslau near Weissenfels in Saxony, was born at Obergreisslau, January 1, 1636. In 1637. his father was appointed pastor at Gross-Lissa near Delitzsch, in Saxony. Benjamin became a student of theology, and giaduated M.A., probably at Leipzig. In the entry of his marriage in the registers of Gross-Lista, for 1657, he is described as "regularly ordained substitute and future successor of this parish": and he is never described in the registers except as Pastor-substitute. His ninth child was born in 1671, and on Jan. 8, 1675, his son Andreas Benjamin, on acting as godfather, is described as “surviving son" of M. Benjamin Prätorius. It is probable that he died some time in 1674, but as the register of deaths of this period is lost, we are unable to fix the exact date (K. Goedeke's Grundriss, vol. iii., 1887, p. 176; manuscript from Pastor Moebius of Gross-Lissa, &c).