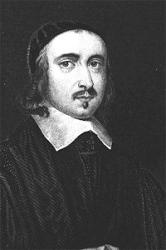 Taylor, Jeremy, D.D. This poet of preachers was born of very humble parentage on both sides, at Cambridge, in August, 1613. His father was a barber. He must have had a good school as a boy. He entered Cams College, of his native city, as a "sizar" in 1626. His career at the university was a brilliant one. He was made fellow of All Souls College, Oxford, in 1632; and rector of Uppingham, Rutlandshire, in 1638, as is still proudly remembered there. He was inevitably "sequestered" by Parliament in 1642. Inexorable necessities of circumstance put him in prison. During the opening of the great Protectorate he kept a school in Wales along with William Nicholson, and acted as chaplain to the Earl of Carberry at Golden Grove, Carmarthenshire, one of the pilgrim spots of our country, because of this and of his imperishable book named after it. In 1658 he is found in Ireland. He preached at Lisburn and Portmore. He returned to London early in 1660, and signed the loyalist or royalist Declaration of the Nobility and Gentry, on April 24th, thirty-five days before the "Restoration." He was not overlooked, as so many faithful royalists were. He was consecrated bishop of Down and Connor in January, 1661; made a member of the Irish Privy Council in February; entrusted with the diocese of Dromore in March: and in the same year was chosen Vice-chancellor of the University of Dublin. He died at Lisburn, August 13th, 1667, and was interred in the choir of the cathedral of Dromore.

Bishop Taylor's complete works have been repeatedly edited, e.g. by Henry Rogers, Pitman, Bishop Heber, Eden; and manifold Selections and single books, as his Holy Living and Holy Dying. Notwithstanding his rich and im¬perial intellect, and enthralling eloquence, and absolute command of words, Bishop Taylor holds only a very small place in the Antiphon of England. It has been admirably said by Dr. Rowland Williams, "Poetry differs from eloquence, as love differs from friendship" (Stray Thoughts, 1878). His attempts at verse are eloquence, not poetry, and even the eloquence hampered and shallowed. The present writer collected his entire poems and verse-translations in the Miscellanies of the Fuller Worthies' Library (1870). In the "Introduction" the reader will find a critical ac¬count of the various hymns; and also therein an account is furnished of a flagrant misap¬propriation of Bishop Taylor's Hymns by Samuel Speed in his Prison Piety, or Meditations divine and moral. Digested into poetical heads on mixt and various subjects (1677). The following is the original title page of the volume in which all the Festival Hymns, save one, first appeared:—>

The Golden Grove, or a Manuall of Daily Prayers and Letanies Fitted to the dayes of the Week. Containing a short Summary of what is to be Believed, Practised, Denied. Also Festival Hymns According to the manner of "The Ancient Church." Composed for the Use of the Devout, especially of Younger Persons; By the Author of "The Great Exemplar." London: Printed by J. F. for R. Rayston, at the Angel in Ivie Lane, 1655. (12 mo.) A 2nd edition appeared in 1657 with the Author's name thusBy Jer. Taylor, D.D., Chaplain in Ordinary to his late Majesty—a courageous announcement in the circumstances. A 3rd edition seems to have disappeared. The 4th ed. appeared in 1659; and from it is derived the second Christmas Hymn, “Awake, my soul," which was not in either the 1st or 2nd ed. Heber, Pitman, and Eden overlooked this hymn. [Rev. A. B. Grosart, D.D., LL.D.]

From Bishop Taylor's Golden Grove, 1655, the following hymns are in common use:--
1. Full of mercy, full of love. Prayer for Charity. From the Golden Grove, p. 116, where it is given in 20 lines, and headed, "A Prayer for Charity." It was given in Bishop Heber's posthumousHymns, &c, 1827, p. 109, and thus came into later hymnbooks.
2. Lord, come away, why dost Thou stay. Advent.
3. Lord, let Thy flames of holy charity. Whitsunday. This begins with line 12 of his hymn in the Golden Grove, "On the Feast of Pentecost, or Whitsunday," p. 157.
His Christmas Carol, "Where is this blessed Babe” and his Prayer, "My soul doth pant towards Thee," are also from the Golden Grove.