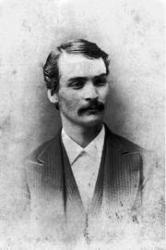 1856 - 1932 Composer of "[I shall be satisfied at last]" in Sifted Wheat Pseudonyms: C. D. Emerson, Charlotte G. Homer, S. B. Jackson, A. W. Lawrence, Jennie Ree ============= For the first seventeen years of his life Charles Hutchinson Gabriel (b. Wilton, IA, 1856; d. Los Angeles, CA, 1932) lived on an Iowa farm, where friends and neighbors often gathered to sing. Gabriel accompanied them on the family reed organ he had taught himself to play. At the age of sixteen he began teaching singing in schools (following in his father's footsteps) and soon was acclaimed as a fine teacher and composer. He moved to California in 1887 and served as Sunday school music director at the Grace Methodist Church in San Francisco. After moving to Chicago in 1892, Gabriel edited numerous collections of anthems, cantatas, and a large number of songbooks for the Homer Rodeheaver, Hope, and E. O. Excell publishing companies. He composed hundreds of tunes and texts, at times using pseudonyms such as Charlotte G. Homer. The total number of his compositions is estimated at about seven thousand. Gabriel's gospel songs became widely circulated through the Billy Sunday­-Homer Rodeheaver urban crusades. Bert Polman
Chas. H. Gabriel

1842 - 1909 Person Name: Rev. G. W. Crofts Author of "I Shall Be Satisfied" in Sifted Wheat We have little data on Crofts, except that he was a minister. --www.hymntime.com/tch/
George W. Crofts
Export as CSV