Angels from the Realms of Glory

Joy Among the Angels 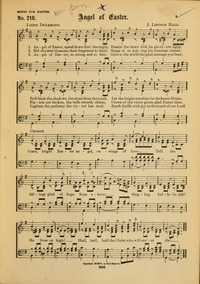 1937 - 2010 Person Name: Richard Proulx, b. 1937 Arranger (acc.) of "[May choirs of angels escort you]" in Gather Comprehensive Richard Proulx (b. St. Paul, MN, April 3, 1937; d. Chicago, IL, February 18, 2010). A composer, conductor, and teacher, Proulx was director of music at the Holy Name Cathedral in Chicago, Illinois (1980-1997); before that he was organist and choirmaster at St. Thomas' Episcopal Church in Seattle, Washington. He contributed his expertise to the Roman Catholic Worship III (1986), The Episcopal Hymnal 1982, The United Methodist Hymnal (1989), and the ecumenical A New Hymnal for Colleges and Schools (1992). He was educated at the University of Minnesota, MacPhail College of Music in Minneapolis, Minnesota, St. John's Abbey in Collegeville, Minnesota, and the Royal School of Church Music in England. He composed more than 250 works. Bert Polman
Richard Proulx

1880 - 1968 Person Name: Healey Willan, 1880- Arranger of alternative refrain of "THE FIRST NOWELL" in The Hymnary of the United Church of Canada Healey Willan (b. Balham, London, England, October 12, 1880; d. Toronto, Ontario, February 16, 1968), theory teacher, composer and organist, was born into an Anglo-Catholic family in England and served several churches in the London area, becoming known especially for his adaptations of Gregorian chant to be able to be sung in English translation. In 1913 he moved to Canada where he led the theory department and was organist at the Toronto Conservatory of Music. He also was organist at St. Paul’s, Canada’s largest Anglican church, and after 1921 at the smaller Church of St. Mary Magdalene. By invitation, he composed an anthem for the coronation of Queen Elizabeth II, a singular honor for one not residing in England. Emily Brink
Healey Willan

Editors: Francis Pott Description: The SmallChurchMusic site was launched in 2006, growing out of the requests from those struggling to provide suitable music for their services and meetings. Rev. Clyde McLennan was ordained in mid 1960’s and was a pastor in many small Australian country areas, and therefore was acutely aware of this music problem. Having also been trained as a Pipe Organist, recordings on site (which are a subset of the smallchurchmusic.com site) are all actually played by Clyde, and also include piano and piano with organ versions. All recordings are in MP3 format. Churches all around the world use the recordings, with downloads averaging over 60,000 per month. The recordings normally have an introduction, several verses and a slowdown on the last verse. Users are encouraged to use software: Audacity (http://www.audacityteam.org) or Song Surgeon (http://songsurgeon.com) (see http://scm-audacity.weebly.com for more information) to adjust the MP3 number of verses, tempo and pitch to suit their local needs. Copyright notice: Rev. Clyde McLennan, performer in this collection, has assigned his performer rights in this collection to Hymnary.org. Non-commercial use of these recordings is permitted. For permission to use them for any other purposes, please contact manager@hymnary.org. Home/Music(smallchurchmusic.com) List SongsAlphabetically List Songsby Meter List Songs byTune Name About
Small Church Music