Author: George Wither Appears in 1 hymnal First Line: Our Lord and brother who put on
The Ascension Day

Hail the day that sees him rise 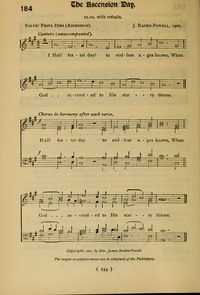 On the Day of Pentecost

1903 - 2000 Person Name: F. Pratt Green (b. 1903) Author of "Glorious the day when Christ was born" in New Church Praise The name of the Rev. F. Pratt Green is one of the best-known of the contemporary school of hymnwriters in the British Isles. His name and writings appear in practically every new hymnal and "hymn supplement" wherever English is spoken and sung. And now they are appearing in American hymnals, poetry magazines, and anthologies. Mr. Green was born in Liverpool, England, in 1903. Ordained in the British Methodist ministry, he has been pastor and district superintendent in Brighton and York, and now served in Norwich. There he continued to write new hymns "that fill the gap between the hymns of the first part of this century and the 'far-out' compositions that have crowded into some churches in the last decade or more." --Seven New Hymns of Hope , 1971. Used by permission.
Fred Pratt Green

Person Name: Anon. Author of "Christ, the Lord is risen to-day" in The New Laudes Domini In some hymnals, the editors noted that a hymn's author is unknown to them, and so this artificial "person" entry is used to reflect that fact. Obviously, the hymns attributed to "Author Unknown" "Unknown" or "Anonymous" could have been written by many people over a span of many centuries.
Anonymous

1813 - 1879 Person Name: Henry T. Smart Composer of "LANCASHIRE" in The United Methodist Hymnal Henry Smart (b. Marylebone, London, England, 1813; d. Hampstead, London, 1879), a capable composer of church music who wrote some very fine hymn tunes (REGENT SQUARE, 354, is the best-known). Smart gave up a career in the legal profession for one in music. Although largely self taught, he became proficient in organ playing and composition, and he was a music teacher and critic. Organist in a number of London churches, including St. Luke's, Old Street (1844-1864), and St. Pancras (1864-1869), Smart was famous for his extemporiza­tions and for his accompaniment of congregational singing. He became completely blind at the age of fifty-two, but his remarkable memory enabled him to continue playing the organ. Fascinated by organs as a youth, Smart designed organs for impor­tant places such as St. Andrew Hall in Glasgow and the Town Hall in Leeds. He composed an opera, oratorios, part-songs, some instrumental music, and many hymn tunes, as well as a large number of works for organ and choir. He edited the Choralebook (1858), the English Presbyterian Psalms and Hymns for Divine Worship (1867), and the Scottish Presbyterian Hymnal (1875). Some of his hymn tunes were first published in Hymns Ancient and Modern (1861). Bert Polman
Henry Thomas Smart