Switch back to the old search page.Advanced Search
Looking for other resources related to Avarice? Check out PreachingandWorship.org.

Our Father, Thou in Heaven Above

Author: Martin Luther Meter: 8.8.8.8.8.8 Appears in 25 hymnals First Line: Our Father, Thou in heav'n above Lyrics: ... , Free from all care and avarice. 6 Forgive our sins, Lord ... Topics: Prayer Scripture: Matthew 6:9-12 Used With Tune: VATER UNSER Text Sources: Tr. composite
Our Father, Thou in Heaven Above

Our Father dear, who art in heav'n

Author: Dr. Martin Luther; Richard Massie Appears in 5 hymnals Lyrics: ... , Free from all care and avarice. 6 Forgive our sins, the ... Topics: The Catechism Prayer Used With Tune: WAVERTREE
Our Father dear, who art in heav'n

[Our Father, Thou in heaven above]

[Blessed are they that perfect are] 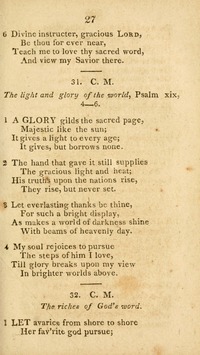 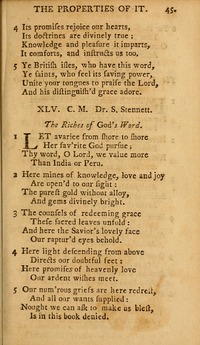 Author: Samuel Stennett Hymnal: Selection of Hymns from the Best Authors, intended to be an Appendix to Dr. Watts' Psalms and Hymns. (1st Am. ed.) #XLV (1792)
Let avarice from [borne] shore to shore 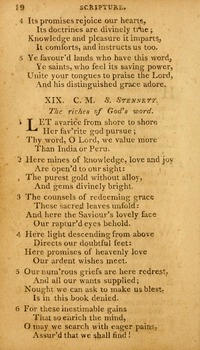 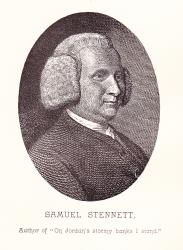 1727 - 1795 Author of "Let avarice from shore to shore" Samuel Stennett was born at Exeter, in 1727. His father was pastor of a Baptist congregation in that city; afterwards of the Baptist Chapel, Little Wild Street, London. In this latter pastorate the son succeeded the father in 1758. He died in 1795. Dr. Stennett was the author of several doctrinal works, and a few hymns. --Annotations of the Hymnal, Charles Hutchins, M.A. 1872. ====================== Stennett, Samuel, D.D., grandson of Joseph Stennett, named above, and son of the Rev. Joseph Stennett, D.D., was born most pro;bably in 1727, at Exeter, where his father was at that time a Baptist minister. When quite young he removed to London, his father having become pastor of the Baptist Church in Little Wild Street, Lincoln's Inn Fields. In 1748, Samuel Stennett became assistant to his father in the ministry, and in 1758 succeeded him in the pastoral office at Little Wild Street. From that time until his death, on Aug. 24, 1795, he held a very prominent position among the Dissenting ministers of London. He was much respected by some of the statesmen of the time, and used his influence with them in support of the principles of religious freedom. The celebrated John Howard was a member of his congregation and an attached friend. In 1763, the University of Aberdeen conferred on him the degree of D.D. Dr. S. Stennett's prose publications consist of volumes of sermons, and pamphlets on Baptism and on Nonconformist Disabilities. He wrote one or two short poems, and contributed 38 hymns to the collection of his friend, Dr. Rippon (1787). His poetical genius was not of the highest order, and his best hymns have neither the originality nor the vigour of some of his grandfather's. The following, however, are pleasing in sentiment and expression, and are in common use more especially in Baptist congregations:— 1. And have I, Christ, no love for Thee? Love for Christ desired. 2. And will the offended God again? The Body the Temple of the Holy Ghost. 3. As on the Cross the Saviour hung. The Thief on the Cross. 4. Behold the leprous Jew. The healing of the Leper. 5. Come, every pious heart. Praise to Christ. 6. Father, at Thy call, I come. Lent. 7. Great God, amid the darksome night. God, a Sun. 8. Great God, what hosts of angels stand. Ministry of Angels. 9. Here at Thy Table, Lord, we meet. Holy Communion. 10. How charming is the place. Public Worship. 11. How shall the sons of men appear? Acceptance through Christ alone. 12. How soft the words my [the] Saviour speaks. Early Piety. 13. How various and how new. Divine Providence. 14. Not all the nobles of the earth. Christians as Sons of God. 15. On Jordan's stormy banks I stand. Heaven anticipated. 16. Prostrate, dear Jesus, at thy feet. Lent. Sometimes, "Dear Saviour, prostrate at Thy feet." 17. Should bounteous nature kindly pour. The greatest of these is Love. From this, "Had I the gift of tongues," st. iii., is taken. 18. Thy counsels of redeeming grace. Holy Scripture. From "Let avarice, from shore to shore." 19. Thy life 1 read, my dearest Lord. Death in Infancy. From this "'Tis Jesus speaks, I fold, says He." 20. 'Tis finished! so the Saviour cried. Good Friday. 21. To Christ, the Lord, let every tongue. Praise of Christ. From this,"Majestic sweetness sits enthroned," st. iii., is taken. 22. To God, my Saviour, and my King. Renewing Grace. 23. To God, the universal King. Praise to God. 24. What wisdom, majesty, and grace. The Gospel. Sometimes, “What majesty and grace." 25. Where two or three with sweet accord. Before the Sermon. 26. Why should a living man complain? Affliction. From this, "Lord, see what floods of sorrow rise," st. iii., is taken. 27. With tears of anguish I lament. Lent. 28. Yonder amazing sight I see. Good Friday. All these hymns, with others by Stennett, were given in Rippon's Baptist Selection, 1787, a few having previously appeared in A Collection of Hymns for the use of Christians of all Denominations, London. Printed for the Booksellers, 1782; and No. 16, in the 1778 Supplement to the 3rd edition of the Bristol Baptist Selection of Ash and Evans. The whole of Stennett's poetical pieces and hymns were included in vol. ii. of his Works, together with a Memoir, by W. J. Jones. 4 vols., 1824. [Rev. W. R. Stevenson, M.A.] --John Julian, Dictionary of Hymnology (1907)
Samuel Stennett

1685 - 1750 Person Name: Jo­hann S. Bach Harmonizer of "VATER UNSER" in The Cyber Hymnal Johann Sebastian Bach was born at Eisenach into a musical family and in a town steeped in Reformation history, he received early musical training from his father and older brother, and elementary education in the classical school Luther had earlier attended. Throughout his life he made extraordinary efforts to learn from other musicians. At 15 he walked to Lüneburg to work as a chorister and study at the convent school of St. Michael. From there he walked 30 miles to Hamburg to hear Johann Reinken, and 60 miles to Celle to become familiar with French composition and performance traditions. Once he obtained a month's leave from his job to hear Buxtehude, but stayed nearly four months. He arranged compositions from Vivaldi and other Italian masters. His own compositions spanned almost every musical form then known (Opera was the notable exception). In his own time, Bach was highly regarded as organist and teacher, his compositions being circulated as models of contrapuntal technique. Four of his children achieved careers as composers; Haydn, Mozart, Beethoven, Mendelssohn, Schumann, Brahms, and Chopin are only a few of the best known of the musicians that confessed a major debt to Bach's work in their own musical development. Mendelssohn began re-introducing Bach's music into the concert repertoire, where it has come to attract admiration and even veneration for its own sake. After 20 years of successful work in several posts, Bach became cantor of the Thomas-schule in Leipzig, and remained there for the remaining 27 years of his life, concentrating on church music for the Lutheran service: over 200 cantatas, four passion settings, a Mass, and hundreds of chorale settings, harmonizations, preludes, and arrangements. He edited the tunes for Schemelli's Musicalisches Gesangbuch, contributing 16 original tunes. His choral harmonizations remain a staple for studies of composition and harmony. Additional melodies from his works have been adapted as hymn tunes. --John Julian, Dictionary of Hymnology (1907)
Johann Sebastian Bach

1827 - 1878 Person Name: C. Winkworth, 1827-78 Translator of "Our Father, Thou in Heaven Above" in Evangelical Lutheran Hymnary Catherine Winkworth (b. Holborn, London, England, 1827; d. Monnetier, Savoy, France, 1878) is well known for her English translations of German hymns; her translations were polished and yet remained close to the original. Educated initially by her mother, she lived with relatives in Dresden, Germany, in 1845, where she acquired her knowledge of German and interest in German hymnody. After residing near Manchester until 1862, she moved to Clifton, near Bristol. A pioneer in promoting women's rights, Winkworth put much of her energy into the encouragement of higher education for women. She translated a large number of German hymn texts from hymnals owned by a friend, Baron Bunsen. Though often altered, these translations continue to be used in many modern hymnals. Her work was published in two series of Lyra Germanica (1855, 1858) and in The Chorale Book for England (1863), which included the appropriate German tune with each text as provided by Sterndale Bennett and Otto Goldschmidt. Winkworth also translated biographies of German Christians who promoted ministries to the poor and sick and compiled a handbook of biographies of German hymn authors, Christian Singers of Germany (1869). Bert Polman ======================== Winkworth, Catherine, daughter of Henry Winkworth, of Alderley Edge, Cheshire, was born in London, Sep. 13, 1829. Most of her early life was spent in the neighbourhood of Manchester. Subsequently she removed with the family to Clifton, near Bristol. She died suddenly of heart disease, at Monnetier, in Savoy, in July, 1878. Miss Winkworth published:— Translations from the German of the Life of Pastor Fliedner, the Founder of the Sisterhood of Protestant Deaconesses at Kaiserworth, 1861; and of the Life of Amelia Sieveking, 1863. Her sympathy with practical efforts for the benefit of women, and with a pure devotional life, as seen in these translations, received from her the most practical illustration possible in the deep and active interest which she took in educational work in connection with the Clifton Association for the Higher Education of Women, and kindred societies there and elsewhere. Our interest, however, is mainly centred in her hymnological work as embodied in her:— (1) Lyra Germanica, 1st Ser., 1855. (2) Lyra Germanica, 2nd Ser., 1858. (3) The Chorale Book for England (containing translations from the German, together with music), 1863; and (4) her charming biographical work, the Christian Singers of Germany, 1869. In a sympathetic article on Miss Winkworth in the Inquirer of July 20, 1878, Dr. Martineau says:— "The translations contained in these volumes are invariably faithful, and for the most part both terse and delicate; and an admirable art is applied to the management of complex and difficult versification. They have not quite the fire of John Wesley's versions of Moravian hymns, or the wonderful fusion and reproduction of thought which may be found in Coleridge. But if less flowing they are more conscientious than either, and attain a result as poetical as severe exactitude admits, being only a little short of ‘native music'" Dr. Percival, then Principal of Clifton College, also wrote concerning her (in the Bristol Times and Mirror), in July, 1878:— "She was a person of remarkable intellectual and social gifts, and very unusual attainments; but what specially distinguished her was her combination of rare ability and great knowledge with a certain tender and sympathetic refinement which constitutes the special charm of the true womanly character." Dr. Martineau (as above) says her religious life afforded "a happy example of the piety which the Church of England discipline may implant.....The fast hold she retained of her discipleship of Christ was no example of ‘feminine simplicity,' carrying on the childish mind into maturer years, but the clear allegiance of a firm mind, familiar with the pretensions of non-Christian schools, well able to test them, and undiverted by them from her first love." Miss Winkworth, although not the earliest of modern translators from the German into English, is certainly the foremost in rank and popularity. Her translations are the most widely used of any from that language, and have had more to do with the modern revival of the English use of German hymns than the versions of any other writer. -- John Julian, Dictionary of Hymnology (1907) ============================ See also in: Hymn Writers of the Church
Catherine Winkworth