Author: Reginald Heber Appears in 602 hymnals First Line: By cool Siloam's shady rill Lyrics: 1 By cool Siloam's shady rill How fair the lily grows! How sweet the breath beneath the hill Of Sharon's dewy rose! 2 Lo! such the child whose early feet The paths of peace have trod; Whose secret heart, with influence sweet, Is upward drawn to God. 3 By ... Topics: The Church of God; Children; Church Ordinances of; Ordinances; Sabbath-School; Children; Church Ordinances of; Ordinances; Sabbath-School Used With Tune: SILOAM
A Christian Child

My Faith Has Found a Resting Place 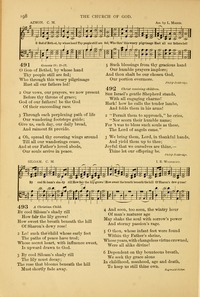 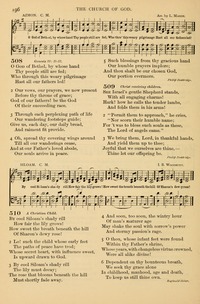 1819 - 1858 Composer of "SILOAM" in Laudes Domini Woodbury, Isaac Baker. (Beverly, Massachusetts, October 23, 1819--October 26, 1858, Columbia, South Carolina). Music editor. As a boy, he studied music in nearby Boston, then spent his nineteenth year in further study in London and Paris. He taught for six years in Boston, traveling throughout New England with the Bay State Glee Club. He later lived at Bellow Falls, Vermont, where he organized the New Hampshire and Vermont Musical Association. In 1849 he settled in New York City where he directed the music at the Rutgers Street Church until ill-health caused him to resign in 1851. He became editor of the New York Musical Review and made another trip to Europe in 1852 to collect material for the magazine. in the fall of 1858 his health broke down from overwork and he went south hoping to regain his strength, but died three days after reaching Columbia, South Carolina. He published a number of tune-books, of which the Dulcimer, of New York Collection of Sacred Music, went through a number of editions. His Elements of Musical Composition, 1844, was later issued as the Self-instructor in Musical Composition. He also assisted in the compilation of the Methodist Hymn Book of 1857. --Leonard Ellinwood, DNAH Archives
I. B. Woodbury

b. 1944 Person Name: Carl P. Daw Jr, b. 1944 Author of "Faith Begins by Letting Go" in Lift Up Your Hearts Carl P. Daw, Jr. (b. Louisville, KY, 1944) is the son of a Baptist minister. He holds a PhD degree in English (University of Virginia) and taught English from 1970-1979 at the College of William and Mary, Williamsburg, Virginia. As an Episcopal priest (MDiv, 1981, University of the South, Sewanee, Tennesee) he served several congregations in Virginia, Connecticut and Pennsylvania. From 1996-2009 he served as the Executive Director of The Hymn Society in the United States and Canada. Carl Daw began to write hymns as a consultant member of the Text committee for The Hymnal 1982, and his many texts often appeared first in several small collections, including A Year of Grace: Hymns for the Church Year (1990); To Sing God’s Praise (1992), New Psalms and Hymns and Spiritual Songs (1996), Gathered for Worship (2006). Other publications include A Hymntune Psalter (2 volumes, 1988-1989) and Breaking the Word: Essays on the Liturgical Dimensions of Preaching (1994, for which he served as editor and contributed two essays. In 2002 a collection of 25 of his hymns in Japanese was published by the United Church of Christ in Japan. He wrote Glory to God: A Companion (2016) for the 2013 hymnal of the Presbyterian Church (U.S.A.). Emily Brink
Carl P. Daw Jr.