Switch back to the old search page.Advanced Search
Looking for other resources related to Compassion? Check out PreachingandWorship.org.

Jesus, Full of All Compassion

Jesus, thou art all compassion

God of Compassion, in Mercy Befriend Us 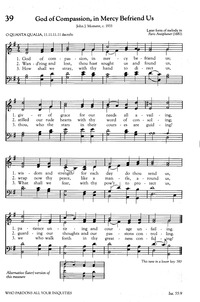 b. 1955 Person Name: Noël Richards, b. 1955 Author of "God, You are waiting, Your heart is breaking" in The Irish Presbyterian Hymbook
Noel Richards

b. 1960 Person Name: Tricia Richards, b. 1960 Author of "God, You are waiting, Your heart is breaking" in The Irish Presbyterian Hymbook
Tricia Richards