Choice of a deacon

[A deacon once, the story goes]

[Gospel Deacon, when the declaration] 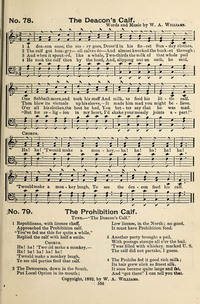 They Voted the Same 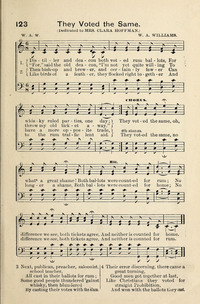 1813 - 1879 Person Name: Henry T. Smart Composer of "[Gospel Deacon, when the declaration]" in Sheng tu shi ge = Hymnary (聖徒詩歌) Henry Smart (b. Marylebone, London, England, 1813; d. Hampstead, London, 1879), a capable composer of church music who wrote some very fine hymn tunes (REGENT SQUARE, 354, is the best-known). Smart gave up a career in the legal profession for one in music. Although largely self taught, he became proficient in organ playing and composition, and he was a music teacher and critic. Organist in a number of London churches, including St. Luke's, Old Street (1844-1864), and St. Pancras (1864-1869), Smart was famous for his extemporiza­tions and for his accompaniment of congregational singing. He became completely blind at the age of fifty-two, but his remarkable memory enabled him to continue playing the organ. Fascinated by organs as a youth, Smart designed organs for impor­tant places such as St. Andrew Hall in Glasgow and the Town Hall in Leeds. He composed an opera, oratorios, part-songs, some instrumental music, and many hymn tunes, as well as a large number of works for organ and choir. He edited the Choralebook (1858), the English Presbyterian Psalms and Hymns for Divine Worship (1867), and the Scottish Presbyterian Hymnal (1875). Some of his hymn tunes were first published in Hymns Ancient and Modern (1861). Bert Polman
Henry Thomas Smart

1746 - 1816 Person Name: Samuel Deacon, Jr. Author of "To Jordan's Stream The Savior Goes" in The Cyber Hymnal Deacon, Samuel, born 1746, at Ratby, in Leicestershire, d. 1816 at Barton, near Market Bosworth, in the same county. He was son of Samuel Deacon, sen., one of the first preachers of the Leicestershire General Baptists; and half brother to John Deacon (q.v.) of Leicester. In 1771, S. Deacon settled at Barton, a small agricultural village, where, however, he presently established a considerable business as clock and watchmaker, and became well known for his mechanical skill. In 1779 he was invited to assist his father in ministering to the cluster of village congregations of General Baptists, of which Barton was the centre. He was popular and useful as a preacher, and continued minister of this church 37 years, receiving no pecuniary remuneration, but himself contributing liberally to various religious enterprises. In 1785 he published a volume entitled, A New Composition of Hymns & Poems chiefly on Divine Subjects; designed for the Amusement and Edification of Christians of all Denominations, more particularly them of the Baptist persuasion, Leicester: printed for the author by George Ireland. It contained 63 hymns, and 20 meditations. Subsequent editions were considerably enlarged, and the collection became known as the Barton Hymns, S. Deacon's style is very homely, and of his numerous hymns, "0 who can comprehend the rest" (Heaven), and "Ye heavy-laden souls" (Invitation), represent most, if not all, now in common use S. Deacon was also the author of several religious books, some very popular in their day, and most of them in metre, but they do not contain any of his hymns. [Rev. W. R. Stevenson, M.A.] -- John Julian, Dictionary of Hymnology (1907)
S. Deacon

Editors: Paul the Deacon Description: The SmallChurchMusic site was launched in 2006, growing out of the requests from those struggling to provide suitable music for their services and meetings. Rev. Clyde McLennan was ordained in mid 1960’s and was a pastor in many small Australian country areas, and therefore was acutely aware of this music problem. Having also been trained as a Pipe Organist, recordings on site (which are a subset of the smallchurchmusic.com site) are all actually played by Clyde, and also include piano and piano with organ versions. All recordings are in MP3 format. Churches all around the world use the recordings, with downloads averaging over 60,000 per month. The recordings normally have an introduction, several verses and a slowdown on the last verse. Users are encouraged to use software: Audacity (http://www.audacityteam.org) or Song Surgeon (http://songsurgeon.com) (see http://scm-audacity.weebly.com for more information) to adjust the MP3 number of verses, tempo and pitch to suit their local needs. Copyright notice: Rev. Clyde McLennan, performer in this collection, has assigned his performer rights in this collection to Hymnary.org. Non-commercial use of these recordings is permitted. For permission to use them for any other purposes, please contact manager@hymnary.org. Home/Music(smallchurchmusic.com) List SongsAlphabetically List Songsby Meter List Songs byTune Name About
Small Church Music