Again We Keep This Solemn Fast

Is this a fast for me?

[Abide with me: fast falls the eventide] 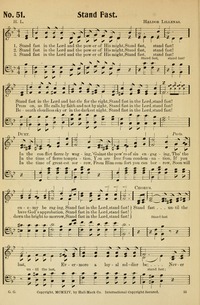 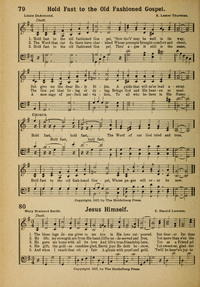 b. 1953 Person Name: Evelyn Simpson-Curenton, b. 1953 Arranger of "EVENTIDE" in Lead Me, Guide Me (2nd ed.) Evelyn Simpson Curenton (born 1953) is a leading African-American composer, pianist, organist, and vocalist. Simpson Curenton began piano lessons at age 5, began to perform with the Singing Simpsons of Philadelphia, a family group, and earned a B.M., Music Education and Voice from Temple University. She has been commissioned to write works for the American Guild of Organists, George Shirley, the late Duke Ellington, and her sister, the late Joy Simpson, arranged music for Kathleen Battle, Jessye Norman, and the Porgy and Bess Chorus of the New York Metropolitan Opera, and has performed with musical organizations such as Philadelphia's National Opera Ebony (later renamed Opera North). Based in the Washington, D.C., area, Curenton is Music Director of the Washington Performing Arts Society's Men and Women of the Gospel and an associate of the Smithsonian Institution. She has given lectures and participated in workshops on early 18th-century black religious music and the music of African-Americans during the Civil Rights era. --en.wikipedia.org
Evelyn Simpson-Curenton

1818 - 1901 Person Name: Edward John Hopkins, Mus.D. (1818-) Composer of "The Sun is sinking fast, No. 2" in The Evangelical Hymnal with Tunes Dr Edward John Hopkins MusDoc United Kingdom 1818-1901. Born at Westminster, England, the son of a clarinetist with the Royal Opera House orchestra, he became an organist (as did two of his brothers) and a composer. In 1826 he became a chorister of the Chapel Royal and sang at the coronation of King William IV in Westminster Abbey. He also sang in the choir of St. Paul’s Cathedral, a double schedule requiring skill and dexterity. On Sunday evenings he would play the outgoing voluntary at St. Martin’s in-the-field. He left Chapel Royal in 1834 and started studying organ construction at two organ factories. He took an appointment at Mitcham Church as organist at age 16, winning an audition against other organists. Four years later he became organist at the Church of St. Peter, Islington. In 1841 he became organist at St. Luke’s, Berwick St., Soho. Two Years later he was organist at Temple Church, which had a historic organ (built in 1683). He held this position for 55 years. In 1845 he married Sarah Lovett, and they had four sons and five daughters. He was closely associated with the Bach Society and was organist for the first English performances of Bach’s St. Matthew Passion. In 1855 he collaborated with Edward Rimbault publishing “The organ, its history and construction” (3 editions 1855-70-77). In 1864 he was one of the founders of the “College of organists”. In 1882 he received an honorary Doctorate of Music from the Archbishop of Canterbury. He composed 30+ hymn tunes and some psalm chants, used by the Church of England. He died in London, England. John Perry
E. J. Hopkins

1823 - 1889 Person Name: William H. Monk Composer of "EVENTIDE (MONK)" in Trinity Hymnal (Rev. ed.) William H. Monk (b. Brompton, London, England, 1823; d. London, 1889) is best known for his music editing of Hymns Ancient and Modern (1861, 1868; 1875, and 1889 editions). He also adapted music from plainsong and added accompaniments for Introits for Use Throughout the Year, a book issued with that famous hymnal. Beginning in his teenage years, Monk held a number of musical positions. He became choirmaster at King's College in London in 1847 and was organist and choirmaster at St. Matthias, Stoke Newington, from 1852 to 1889, where he was influenced by the Oxford Movement. At St. Matthias, Monk also began daily choral services with the choir leading the congregation in music chosen according to the church year, including psalms chanted to plainsong. He composed over fifty hymn tunes and edited The Scottish Hymnal (1872 edition) and Wordsworth's Hymns for the Holy Year (1862) as well as the periodical Parish Choir (1840-1851). Bert Polman
William Henry Monk

Hymns Suited to the Feasts and Fasts of the Church ...

Editors: Bessie Porter Head Description: The SmallChurchMusic site was launched in 2006, growing out of the requests from those struggling to provide suitable music for their services and meetings. Rev. Clyde McLennan was ordained in mid 1960’s and was a pastor in many small Australian country areas, and therefore was acutely aware of this music problem. Having also been trained as a Pipe Organist, recordings on site (which are a subset of the smallchurchmusic.com site) are all actually played by Clyde, and also include piano and piano with organ versions. All recordings are in MP3 format. Churches all around the world use the recordings, with downloads averaging over 60,000 per month. The recordings normally have an introduction, several verses and a slowdown on the last verse. Users are encouraged to use software: Audacity (http://www.audacityteam.org) or Song Surgeon (http://songsurgeon.com) (see http://scm-audacity.weebly.com for more information) to adjust the MP3 number of verses, tempo and pitch to suit their local needs. Copyright notice: Rev. Clyde McLennan, performer in this collection, has assigned his performer rights in this collection to Hymnary.org. Non-commercial use of these recordings is permitted. For permission to use them for any other purposes, please contact manager@hymnary.org. Home/Music(smallchurchmusic.com) List SongsAlphabetically List Songsby Meter List Songs byTune Name About
Small Church Music