Faith of our fathers, living still

This Is My Father's World

Author: Rev. Maltbie D. Babcock Meter: 6.6.8.6 D Appears in 294 hymnals Lyrics: 1 This is my Father's world, And to my list'ning ears All nature sings, and round me rings The music of the spheres. This is my Father's world; I rest me in the thought Of rocks and trees, of skies and seas - His hand the wonders wrought. 2 This is my ... Topics: God Sovereignty Used With Tune: TERRA BEATA Text Sources: Words from "Thoughts for Every Day Living"
This Is My Father's World 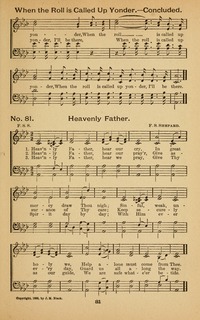 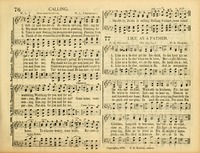 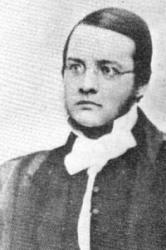 1825 - 1878 Author of "Eternal Father! strong to save" in The Hymnal William Whiting was born in Kensington, November 1, 1825, and was educated at Clapham and Winchester Colleges. He was later master of Winchester College Choristers' School, where he wrote Rural Thoughts and Other Poems, 1851. He died at Winchester. --The Hymnal 1940 Companion =============== Whiting, William, was born in Kensington, London, Nov. 1, 1825, and educated at Clapham. He was for several years Master of the Winchester College Choristers' School. His Rural Thoughts and other poems were published in 1851; but contained no hymns. His reputation as a hymnwriter is almost exclusively confined to his “Eternal Father, strong to save". Other hymns by him were contributed to the following collections:— i. To the 1869 Appendix to the Society for Promoting Christian Knowledge Psalms & Hymns 1. O Lord the heaven Thy power displays. Evening. 2. Onward through life Thy children stray. Changing Scenes of Life. ii. To an Appendix to Hymns Ancient & Modern issued by the Clergy of St. Philip's, Clerkenwell, 1868. 3. Jesus, Lord, our childhood's Pattern. Jesus the Example to the Young. 4. Lord God Almighty, Everlasting Father. Holy Trinity. 5. Now the harvest toil is over. Harvest. 6. 0 Father of abounding grace. Consecration of a Church. 7. We thank Thee, Lord, for all. All Saints Day. iii. To The Hymnary, 1872. 8. Amen, the deed in faith is done. Holy Baptism. 9. Jesus Christ our Saviour. For the Young. 10. Now the billows, strong and dark. For Use at Sea. 11. 0 Father, Who the traveller's way. For Travellers by Land. 12. When Jesus Christ was crucified. Holy Baptism. Mr. Whiting's hymns, with the exception of his “Eternal Father," &c, have not a wide acceptance. He died in 1878. -- John Julian, Dictionary of Hymnology (1907)
William Whiting

1895 - 1984 Person Name: F. Bland Tucker Adapter of "Father, We Give You Thanks" in Lift Up Your Hearts Francis Bland Tucker (born Norfolk, Virginia, January 6, 1895). The son of a bishop and brother of a Presiding bishop of the Episcopal Church, he was educated at the University of Virginia, B.A., 1914, and at Virginia Theological Seminary, B.D., 1920; D.D., 1944. He was ordained deacon in 1918, priest in 1920, after having served as a private in Evacuation Hospital No.15 of the American Expeditionary Forces in France during World War I. His first charge was as a rector of Grammer Parish, Brunswick County, in southern Virginia. From 1925 to 1945, he was rector of historic St. John's Church, Georgetown, Washington, D.C. Then until retirement in 1967 he was rector of John Wesley's parish in Georgia, old Christ Church, Savannah. In "Reflections of a Hymn Writer" (The Hymn 30.2, April 1979, pp.115–116), he speaks of never having a thought of writing a hymn until he was named a member of the Joint Commission on the Revision of the Hymnal in 1937 which prepared the Hymnal 1940
Bland Tucker