[O God, my God, why have you abandoned me] 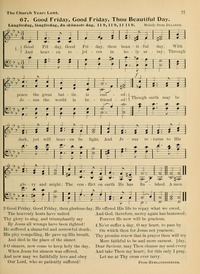 We Walk with Faith and Passion (Good Friday)

1676 - 1749 Person Name: Charles Coffin, d. 1749 Author of "His trial o'er, and now beneath" in Church Book Coffin, Charles, born at Buzaney (Ardennes) in 1676, died 1749, was principal of the college at Beauvais, 1712 (succeeding the historian Rollin), and rector of the University of Paris, 1718. He published in 1727 some, of his Latin poems, for which he was already noted, and in 1736 the bulk of his hymns appeared in the Paris Breviary of that year. In the same year he published them as Hymni Sacri Auctore Carolo Coffin, and in 1755 a complete ed. of his Works was issued in 2 vols. To his Hymni Sacri is prefixed an interesting preface. The whole plan of his hymns, and of the Paris Breviary which he so largely influenced, comes out in his words. "In his porro scribendis Hymnis non tam poetico indulgendunv spiritui, quam nitoro et pietate consulendum esse existimavi. Pleraque igitur, argumentis convenientia e purissiinis Scripturae Sacrae fontibus deprompsi quac idoneis Ecclesiae cantui numeris alligarem." His hymns are described by a French critic as having less brilliancy than those of Santüil (q.v.), but more simplicity and unction. They number 100 in the edition of 1736. Translated into English by J. Chandler, I. Williams and others, are noted under their respective Latin first lines. [William T. Brooke] -- John Julian, Dictionary of Hymnology (1907)
Charles Coffin

b. 1950 Person Name: Marty Haugen, b. 1950 Arranger of "[On the night on which our Savior was betrayed]" in Journeysongs (3rd ed.) Marty Haugen (b. 1950), is a prolific liturgical composer with many songs included in hymnals across the liturgical spectrum of North American hymnals and beyond, with many songs translated into different languages. He was raised in the American Lutheran Church, received a BA in psychology from Luther College, yet found his first position as a church musician in a Roman Catholic parish at a time when the Roman Catholic Church was undergoing profound liturgical and musical changes after Vatican II. Finding a vocation in that parish to provide accessible songs for worship, he continued to compose and to study, receiving an MA in pastoral studies at the University of St. Thomas in St. Paul Minnesota. A number of liturgical settings were prepared for the Evangelical Lutheran Church in America and more than 400 of his compositions are available from several publishers, especially GIA Publications, who also produced some 30 recordings of his songs. He is composer-in-residence at Mayflower Community Congregational Church in Minneapolis and continues to compose and travel to speak and teach at worship events around the world. Emily Brink
Marty Haugen

b. 1933 Composer of "GOOD FRIDAY" in Worship and Song Colin Gibson (b. 1933) was born in Dunedin, the south island of New Zealand. He has been writing hymn texts and hymn settings for over 20 years. His works have been published and performed in Africa, the United States, Asia and Australasia, Great Britain and Europe. He is organist and director of the Mornington Methodist Choir, Dunedin, New Zealand, a lay preacher, and retired in 1999 as Head of the Department and Donald Collie Professor of English at the University of Otago where he currently heads the Department of Theatre Studies and continues to lecture on English Literature as Emeritus Professor. He has conducted numerous hymn workshops in New Zealand, Australia and Great Britain, and has been co-editor of a number of hymn collections. His frequent collaboration with Shirley Erena Murray is represented in several Hope publications, and he has his own published collections of hymns: Singing Love (Collins) and more recently Reading the Signature (Hope, 1994 - Code #1753) and Songs for a Rainbow People (Hope, 1998 - Code #8005). Three of his hymns are included in the Hope hymnal Worship & Rejoice (2001). --www.hopepublishing.com
Colin Gibson