When Christ's Appearing Was Made Known

Author: Coelius Sedulius Meter: 8.8.8.8 Appears in 9 hymnals Lyrics: 5 All glory, Jesus, be to Thee For ... When Christ’s appearing was ...
When Christ's Appearing Was Made Known

All hail the power of Jesus' name!

How sweet the name of Jesus sounds

Author: John Newton Appears in 1,563 hymnals Lyrics: 1 How sweet the name of Jesus sounds In a believer's ear! It soothes his sorrows, heals his wounds, And drives away his fear. 2 It makes the wounded spirit whole, And calms the troubled breast; 'Tis manna to the hungry soul, And to the weary, rest. 3 Dear ... Topics: Worship Adoration of Christ Used With Tune: ST. AGNES
How sweet the name of Jesus sounds 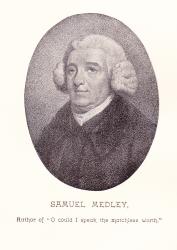 1738 - 1799 Author of "Jesus, engrave it on my heart" in The Seventh-Day Adventist Hymn and Tune Book Medley, Samuel, born June 23, 1738, at Cheshunt, Herts, where his father kept a school. He received a good education; but not liking the business to which he was apprenticed, he entered the Royal Navy. Having been severely wounded in a battle with the French fleet off Port Lagos, in 1759, he was obliged to retire from active service. A sermon by Dr. Watts, read to him about this time, led to his conversion. He joined the Baptist Church in Eagle Street, London, then under the care of Dr. Gifford, and shortly afterwards opened a school, which for several years he conducted with great success. Having begun to preach, he received, in 1767, a call to become pastor of the Baptist church at Watford. Thence, in 1772, he removed to Byrom Street, Liverpool, where he gathered a large congregation, and for 27 years was remarkably popular and useful. After a long and painful illness he died July 17, 1799. Most of Medley's hymns were first printed on leaflets or in magazines (the Gospel Magazine being one). They appeared in book form as:— (1) Hymns, &c. Bradford, 1785. This contains 42 hymns. (2) Hymns on Select Portions of Scripture by the Rev. Mr. Medley. 2nd ed. Bristol. W. Pine. 1785. This contains 34 hymns, and differs much from the Bradford edition both in the text and in the order of the hymns. (3) An enlargement of the same in 1787. (4) A small collection of new Hymns, London, 1794. This contains 23 hymns. (5) Hymns. The Public Worship and Private Devotion of True Christians Assisted in some thoughts in Verse; principally drawn from Select Passages of the Word of God. By Samuel Medley. London. Printed for J. Johnson. 1800. A few of his hymns are also found in a Collection for the use of All Denominations, published in London in 1782. Medley's hymns have been very popular in his own denomination, particularly among the more Calvinistic churches. In Denham's Selections there are 48, and in J. Stevens's Selections, 30. Their charm consists less in their poetry than in the warmth and occasional pathos with which they give expression to Christian experience. In most of them also there is a refrain in the last line of each verse which is often effective. Those in common use include:— 1. Come, join ye saints, with heart and voice. (1800). Complete in Christ. 2. Death is no more among our foes. Easter. 3. Eternal Sovereign Lord of all. (1789). Praise for Providential Care. 4. Far, far beyond these lower skies. (1789). Jesus, the Forerunner. 5. Father of mercies, God of love, whose kind, &c. (1789.) New Year. 6. Great God, today Thy grace impart. Sermon. 7. Hear, gracious God! a sinner's cry. (1789). Lent. 8. In heaven the rapturous song began. Christmas. 9. Jesus, engrave it on my heart. (1789). Jesus, Needful to all. 10. Mortals, awake, with angels join. (1782). Christmas. 11. My soul, arise in joyful lays. (1789). Joy in God. 12. Now, in a song of grateful praise. Praise to Jesus. In the Gospel Magazine, June, 1776. 13. O could I speak the matchless worth. (1789.) Praise of Jesus. 14. O for a bright celestial ray. Lent. 15. O God, Thy mercy, vast and free. (1800). Dedication of Self to God. 16. O let us tell the matchless love. Praise to Jesus. 17. O what amazing words of grace. (1789). Foutain of Living Waters. 18. Saints die, and we should gently weep. (1800). Death and Burial. From his "Dearest of Names, Our Lord and King." 19. See a poor sinner, dearest Lord. Lent. 20. Sing the dear Saviour's glorious fame. (1789). Jesus the Breaker of bonds. In 1800 a Memoir of Medley was published by his son, which is regarded by members of the family now living as authoritative. But in 1833 appeared another Memoir by Medley's daughter Sarah, to which are appended 52 hymns for use on Sacramental occasions. These she gives as her father's. But 8 of them are undoubtedly by Thos. Kelly, published by him in 1815, and reprinted in subsequent editions of his Hymns. The remainder are by Medley. Nearly all of these 52 hymns (both Medley's and Kelly's) have been altered in order to adapt them to Sacramental use. In Sarah Medley's volume, Kelly's hymns all follow one another, and three of them are in a metre which Medley apparently never used. What could have been Sarah Medley's motive in all this it is hard to divine. She is said to have been a clever, though unamiable woman, and was herself the author of a small volume of Poems published in 1807. In the Memoir she does not conceal her hatred of her brother. [Rev. W. R. Stevenson, M.A.] -- John Julian, Dictionary of Hymnology (1907)
Samuel Medley

Person Name: Anon. Author of "Jesus, my love, my chief delight" in The Seventh-Day Adventist Hymn and Tune Book In some hymnals, the editors noted that a hymn's author is unknown to them, and so this artificial "person" entry is used to reflect that fact. Obviously, the hymns attributed to "Author Unknown" "Unknown" or "Anonymous" could have been written by many people over a span of many centuries.
Anonymous

1827 - 1878 Person Name: Catherine Winkworth, 1827-1878 Translator of "Lord Jesus Christ, Be Present Now" in Hymns for Youth Catherine Winkworth (b. Holborn, London, England, 1827; d. Monnetier, Savoy, France, 1878) is well known for her English translations of German hymns; her translations were polished and yet remained close to the original. Educated initially by her mother, she lived with relatives in Dresden, Germany, in 1845, where she acquired her knowledge of German and interest in German hymnody. After residing near Manchester until 1862, she moved to Clifton, near Bristol. A pioneer in promoting women's rights, Winkworth put much of her energy into the encouragement of higher education for women. She translated a large number of German hymn texts from hymnals owned by a friend, Baron Bunsen. Though often altered, these translations continue to be used in many modern hymnals. Her work was published in two series of Lyra Germanica (1855, 1858) and in The Chorale Book for England (1863), which included the appropriate German tune with each text as provided by Sterndale Bennett and Otto Goldschmidt. Winkworth also translated biographies of German Christians who promoted ministries to the poor and sick and compiled a handbook of biographies of German hymn authors, Christian Singers of Germany (1869). Bert Polman ======================== Winkworth, Catherine, daughter of Henry Winkworth, of Alderley Edge, Cheshire, was born in London, Sep. 13, 1829. Most of her early life was spent in the neighbourhood of Manchester. Subsequently she removed with the family to Clifton, near Bristol. She died suddenly of heart disease, at Monnetier, in Savoy, in July, 1878. Miss Winkworth published:— Translations from the German of the Life of Pastor Fliedner, the Founder of the Sisterhood of Protestant Deaconesses at Kaiserworth, 1861; and of the Life of Amelia Sieveking, 1863. Her sympathy with practical efforts for the benefit of women, and with a pure devotional life, as seen in these translations, received from her the most practical illustration possible in the deep and active interest which she took in educational work in connection with the Clifton Association for the Higher Education of Women, and kindred societies there and elsewhere. Our interest, however, is mainly centred in her hymnological work as embodied in her:— (1) Lyra Germanica, 1st Ser., 1855. (2) Lyra Germanica, 2nd Ser., 1858. (3) The Chorale Book for England (containing translations from the German, together with music), 1863; and (4) her charming biographical work, the Christian Singers of Germany, 1869. In a sympathetic article on Miss Winkworth in the Inquirer of July 20, 1878, Dr. Martineau says:— "The translations contained in these volumes are invariably faithful, and for the most part both terse and delicate; and an admirable art is applied to the management of complex and difficult versification. They have not quite the fire of John Wesley's versions of Moravian hymns, or the wonderful fusion and reproduction of thought which may be found in Coleridge. But if less flowing they are more conscientious than either, and attain a result as poetical as severe exactitude admits, being only a little short of ‘native music'" Dr. Percival, then Principal of Clifton College, also wrote concerning her (in the Bristol Times and Mirror), in July, 1878:— "She was a person of remarkable intellectual and social gifts, and very unusual attainments; but what specially distinguished her was her combination of rare ability and great knowledge with a certain tender and sympathetic refinement which constitutes the special charm of the true womanly character." Dr. Martineau (as above) says her religious life afforded "a happy example of the piety which the Church of England discipline may implant.....The fast hold she retained of her discipleship of Christ was no example of ‘feminine simplicity,' carrying on the childish mind into maturer years, but the clear allegiance of a firm mind, familiar with the pretensions of non-Christian schools, well able to test them, and undiverted by them from her first love." Miss Winkworth, although not the earliest of modern translators from the German into English, is certainly the foremost in rank and popularity. Her translations are the most widely used of any from that language, and have had more to do with the modern revival of the English use of German hymns than the versions of any other writer. -- John Julian, Dictionary of Hymnology (1907) ============================ See also in: Hymn Writers of the Church
Catherine Winkworth