Switch back to the old search page.Advanced Search
Looking for other resources related to Jesus Christ's Humanity? Check out PreachingandWorship.org.

Author: Catharine M. Noel Meter: 6.5.6.5 D Appears in 220 hymnals First Line: At the name of Jesus every knee shall bow Lyrics: 1 At the name of Jesus every knee shall bow, every tongue confess him King of glory now; ’tis the Father’s pleasure we should call him Lord, who from the beginning was the mighty Word. 2 Humbled for a season, to receive a name from the lips of sinners unto ... Topics: Canticles, Metrical Paraphrase of; Christian Year Passion/Palm Sunday; Christian Year Christ the King; Commitment; Jesus Christ; Jesus Christ Lordship; Jesus Christ Love of; Jesus Christ Name of; The Grace of Jesus Christ In Praise of Christ; Canticles, Metrical Paraphrase of; Testimony and Witness Scripture: Philippians 2:5-11 Used With Tune: KING'S WESTON
At the Name of Jesus

Jesus, I my cross have taken

Author: Henry F. Lyte Appears in 1,209 hymnals Lyrics: 1 Jesus, I my cross have taken, All to leave and follow Thee; Naked, poor, despised, forsaken, Thou, from hence, my all shalt be. Perish every fond ambition, All I've sought, or hoped, or known; Yet how rich is my condition! God and heaven are still my own ... Topics: Christians Steadfastness of; Consecration; Cross Bearing; Fellowship with God; Following Christ; Sanctification; Self-Denial Used With Tune: ARMSTRONG
Jesus, I my cross have taken

Cross of Jesus, Cross of Sorrow 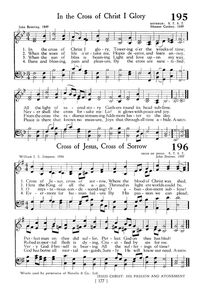 Author: William J. S. Simpson Hymnal: The Hymnbook #196 (1955) Meter: 8.7.8.7 Lyrics: 1 Cross of Jesus, cross of sorrow, Where the blood of Christ was shed, Perfect man on thee did suffer, Perfect God on thee has bled! 2 Here the King of all the ages, Throned in light ere worlds could be, Robed in mortal flesh is dying, Crucified by sin for ... Topics: Christ Passion; Christ Atonement; Christ King; Christ Sympathy; Jesus Christ His Passion and Atonement Scripture: Philippians 2:6-8 Tune Title: CROSS OF JESUS
Cross of Jesus, Cross of Sorrow

Under the Cross of Jesus

1817 - 1877 Author of "At the Name of Jesus" in Psalter Hymnal (Gray) Caroline Marie Noel (b. Teston, Kent, England, 1817; d. St. Marylebone, London, England, 1877) The daughter of an Anglican clergyman and hymn writer, she began to write poetry in her late teens but then abandoned it until she was in her forties. During those years she suffered frequent bouts of illness and eventually became an invalid. To encourage both herself and others who were ill or incapacitated, Noel began to write devotional verse again. Her poems were collected in The Name of Jesus and Other Verses for the Sick and Lonely (1861, enlarged in 1870). Bert Polman ================ Noel, Caroline Maria, daughter of the Hon. Gerard T. Noel (p. 809, ii.), and niece of the Hon. Baptist W. Noel, was born in London, April 10, 1817, and died at 39 Great Cumberland Place, Hyde Park, Dec. 7, 1877. Her first hymn, "Draw nigh unto my soul" (Indwelling), was written when she was 17. During the next three years she wrote about a dozen pieces: from 20 years of age to 40 she wrote nothing; and during the next 20 years the rest of her pieces were written. The first edition of her compositions was published as The Name of Jesus and Other Verses for the Sick and Lonely, in 1861. This was enlarged from time to time, and its title subsequently changed by the publishers to The Name of Jesus and Other Poems. The 1878 ed. contains 78 pieces. Miss Noel, in common with Miss Charlotte Elliott, was a great sufferer, and many of these verses were the outcome of her days of pain. They are specially adapted "for the Sick and Lonely" and were written rather for private meditation than for public use, although several are suited to the latter purpose. Her best known hymn is the Processional for Ascension Day, "At the Name of Jesus." It is in the enlarged edition of The Name of Jesus, &c, 1870, p. 59, and is dated 1870 by her family. --John Julian, Dictionary of Hymnology, Appendix, Part II (1907)
Caroline M. Noel

b. 1936 Person Name: Brian Wren Author of "Christ Is Alive!" in The Presbyterian Hymnal Brian Wren (b. Romford, Essex, England, 1936) is a major British figure in the revival of contemporary hymn writing. He studied French literature at New College and theology at Mansfield College in Oxford, England. Ordained in 1965, he was pastor of the Congregational Church (now United Reformed) in Hockley and Hawkwell, Essex, from 1965 to 1970. He worked for the British Council of Churches and several other organizations involved in fighting poverty and promoting peace and justice. This work resulted in his writing of Education for Justice (1977) and Patriotism and Peace (1983). With a ministry throughout the English-speaking world, Wren now resides in the United States where he is active as a freelance lecturer, preacher, and full-time hymn writer. His hymn texts are published in Faith Looking Forward (1983), Praising a Mystery (1986), Bring Many Names (1989), New Beginnings (1993), and Faith Renewed: 33 Hymns Reissued and Revised (1995), as well as in many modern hymnals. He has also produced What Language Shall I Borrow? (1989), a discussion guide to inclusive language in Christian worship. Bert Polman
Brian A. Wren

1835 - 1917 Person Name: Folliott S. Pierpoint, 1835-1917 Author of "For the Beauty of the Earth" in Hymns of the Saints In the spring of 1863, Folliott S. Pierpoint (b. Bath, Somerset, England, 1835; d. Newport, Monmouthshire, England, 1917) sat on a hilltop outside his native city of Bath, England, admiring the country view and the winding Avon River. Inspired by the view to think about God's gifts in creation and in the church, Pierpont wrote this text. Pierpont was educated at Queen's College, Cambridge, England, and periodically taught classics at Somersetshire College. But because he had received an inheritance, he did not need a regular teaching position and could afford the leisure of personal study and writing. His three volumes of poetry were collected in 1878; he contributed hymns to The Hymnal Noted (1852) and Lyra Eucharistica (1864). "For the Beauty of the Earth" is the only Pierpont hymn still sung today. Bert Polman ================== Pierpoint, Folliott Sandford, M.A., son of William Home Pierpoint of Bath, was born at Spa Villa, Bath, Oct. 7, 1835, and educated at Queen's College, Cambridge, graduating in classical honours in 1871. He has published The Chalice of Nature and Other Poems, Bath, N.D. This was republished in 1878 as Songs of Love, The Chalice of Nature, and Lyra Jesu. He also contributed hymns to the Churchman's Companion (London Masters), the Lyra Eucharistica, &c. His hymn on the Cross, "0 Cross, O Cross of shame," appeared in both these works. He is most widely known through:— "For the beauty of the earth." Holy Communion, or Flower Service. This was contributed to the 2nd edition of Orby Shipley's Lyra Eucharistica, 1864, in 8 stanzas of 6 lines, as a hymn to be sung at the celebration of Holy Communion. In this form it is not usually found, but in 4, or sometimes in 5, stanzas, it is extensively used for Flower Services and as a Children's hymn. --John Julian, Dictionary of Hymnology (1907)
Folliott Sandford Pierpoint