Faith of Our Mothers

There's a Song in the Air

Author: Folliott S. Pierpoint Meter: 7.7.7.7.7.7 Appears in 569 hymnals Lyrics: 1 For the beauty of the earth, For the glory of the skies, For the love which from our birth Over and around us lies; Refrain: Lord of all, to Thee we raise This our hymn of grateful praise. 2 For the wonder of each hour Of the day and of the night, Hill ... Topics: Mother's Day Used With Tune: DIX
For the Beauty of the Earth

[Bless our mothers, Lord, we pray] 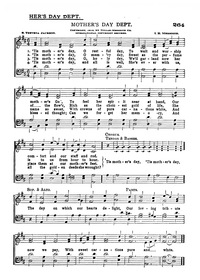 I Never Can Forget the Day (My Mother's Prayer) 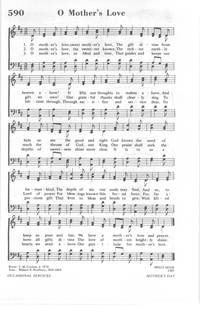 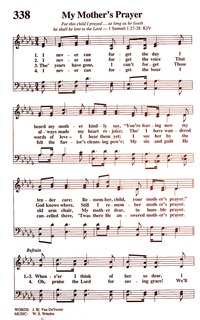 1812 - 1897 Person Name: Frances Elizabeth Cox, 1812–1897 Translator of "Sing Praise to Him" in Hymns of the Church of Jesus Christ of Latter-day Saints Cox, Frances Elizabeth, daughter of Mr. George V. Cox, born at Oxford, is well known as a successful translator of hymns from the German. Her translations were published as Sacred Hymns from the German, London, Pickering. The 1st edition, pub. 1841, contained 49 translations printed with the original text, together with biographical notes on the German authors. In the 2nd edition, 1864, Hymns from the German, London, Rivingtons, the translations were increased to 56, those of 1841 being revised, and with additional notes. The 56 translations were composed of 27 from the 1st ed. (22 being omitted) and 29 which were new. The best known of her translations are "Jesus lives! no longer [thy terrors] now" ; and ”Who are these like stars appearing ?" A few other translations and original hymns have been contributed by Miss Cox to the magazines; but they have not been gathered together into a volume. -- John Julian, Dictionary of Hymnology (1907)
Frances Elizabeth Cox

1809 - 1847 Person Name: Felix Mendelssohn, 1809-1874 Harmonizer of "NUN DANKET" in Worship and Service Hymnal Felix Mendelssohn-Bartholdy (b. Hamburg, Germany, 1809; d. Leipzig, Germany, 1847) was the son of banker Abraham Mendelssohn and the grandson of philosopher Moses Mendelssohn. His Jewish family became Christian and took the Bartholdy name (name of the estate of Mendelssohn's uncle) when baptized into the Lutheran church. The children all received an excellent musical education. Mendelssohn had his first public performance at the age of nine and by the age of sixteen had written several symphonies. Profoundly influenced by J. S. Bach's music, he conducted a performance of the St. Matthew Passion in 1829 (at age 20!) – the first performance since Bach's death, thus reintroducing Bach to the world. Mendelssohn organized the Domchor in Berlin and founded the Leipzig Conservatory of Music in 1843. Traveling widely, he not only became familiar with various styles of music but also became well known himself in countries other than Germany, especially in England. He left a rich treasury of music: organ and piano works, overtures and incidental music, oratorios (including St. Paul or Elijah and choral works, and symphonies. He harmonized a number of hymn tunes himself, but hymnbook editors also arranged some of his other tunes into hymn tunes. Bert Polman
Felix Mendelssohn-Bartholdy