Author: Edward Carswell Appears in 1 hymnal First Line: Old party politicians; We've trusted you to do
I like an honest Democrat

Politeness is to do and say

Author: Unknown Appears in 1 hymnal Topics: For Younger Children General Used With Tune: BABYLON
Politeness is to do and say

We will fortify With what you pay for the curse of curses!

Author: Silver Lake Quartette Appears in 1 hymnal First Line: O Blaine, of Maine, Has a new refrain
We will fortify With what you pay for the curse of curses!

Politeness is to do and say

How do you do

Author: Jessie H. Brown Pounds Hymnal: Rainbow Songs #d113 (1916) First Line: This is the way that polite people say Refrain First Line: Children, be careful to do it just so
How do you do

Inspired by love and anger

Person Name: Unknown Author of "Politeness is to do and say" in The Beacon Song and Service book In some hymnals, the editors noted that a hymn's author is unknown to them, and so this artificial "person" entry is used to reflect that fact. Obviously, the hymns attributed to "Author Unknown" "Unknown" or "Anonymous" could have been written by many people over a span of many centuries.
Anonymous

1685 - 1750 Person Name: Johann Sebastian Bach, 1685-1750 Composer of "BABYLON" in The Beacon Song and Service book Johann Sebastian Bach was born at Eisenach into a musical family and in a town steeped in Reformation history, he received early musical training from his father and older brother, and elementary education in the classical school Luther had earlier attended. Throughout his life he made extraordinary efforts to learn from other musicians. At 15 he walked to Lüneburg to work as a chorister and study at the convent school of St. Michael. From there he walked 30 miles to Hamburg to hear Johann Reinken, and 60 miles to Celle to become familiar with French composition and performance traditions. Once he obtained a month's leave from his job to hear Buxtehude, but stayed nearly four months. He arranged compositions from Vivaldi and other Italian masters. His own compositions spanned almost every musical form then known (Opera was the notable exception). In his own time, Bach was highly regarded as organist and teacher, his compositions being circulated as models of contrapuntal technique. Four of his children achieved careers as composers; Haydn, Mozart, Beethoven, Mendelssohn, Schumann, Brahms, and Chopin are only a few of the best known of the musicians that confessed a major debt to Bach's work in their own musical development. Mendelssohn began re-introducing Bach's music into the concert repertoire, where it has come to attract admiration and even veneration for its own sake. After 20 years of successful work in several posts, Bach became cantor of the Thomas-schule in Leipzig, and remained there for the remaining 27 years of his life, concentrating on church music for the Lutheran service: over 200 cantatas, four passion settings, a Mass, and hundreds of chorale settings, harmonizations, preludes, and arrangements. He edited the tunes for Schemelli's Musicalisches Gesangbuch, contributing 16 original tunes. His choral harmonizations remain a staple for studies of composition and harmony. Additional melodies from his works have been adapted as hymn tunes. --John Julian, Dictionary of Hymnology (1907)
Johann Sebastian Bach 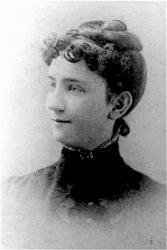 1861 - 1921 Author of "How do you do" Jessie Brown Pounds was born in Hiram, Ohio, a suburb of Cleveland on 31 August 1861. She was not in good health when she was a child so she was taught at home. She began to write verses for the Cleveland newspapers and religious weeklies when she was fifteen. After an editor of a collection of her verses noted that some of them would be well suited for church or Sunday School hymns, J. H. Fillmore wrote to her asking her to write some hymns for a book he was publishing. She then regularly wrote hymns for Fillmore Brothers. She worked as an editor with Standard Publishing Company in Cincinnati from 1885 to 1896, when she married Rev. John E. Pounds, who at that time was a pastor of the Central Christian Church in Indianapolis. A memorable phrase would come to her, she would write it down in her notebook. Maybe a couple months later she would write out the entire hymn. She is the author of nine books, about fifty librettos for cantatas and operettas and of nearly four hundred hymns. Her hymn "Beautiful Isle of Somewhere" was sung at President McKinley's funeral. Dianne Shapiro, from "The Singers and Their Songs: sketches of living gospel hymn writers" by Charles Hutchinson Gabriel (Chicago: The Rodeheaver Company, 1916)
Jessie Brown Pounds

Prohibition Bells and Songs of the New Crusade 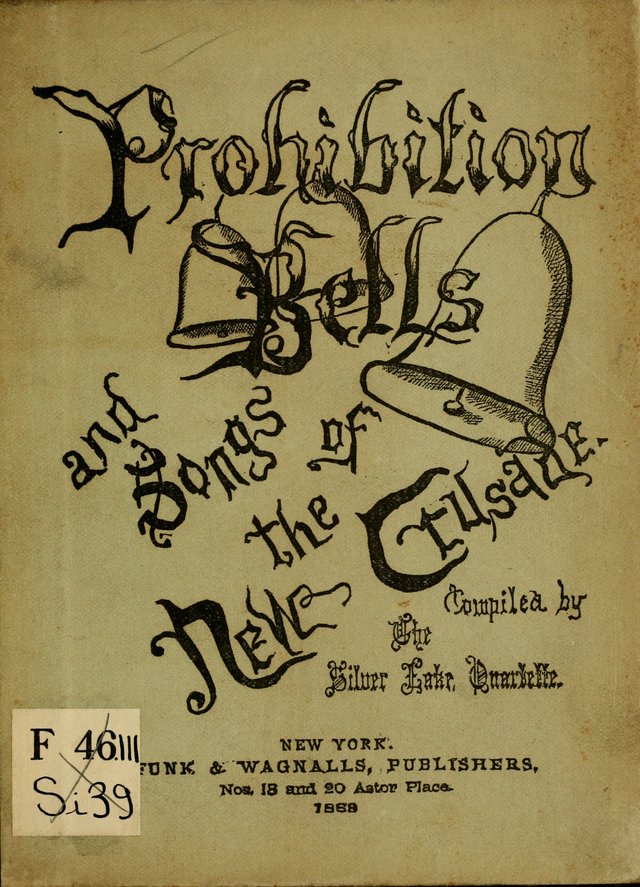