Come to the Place of Grief and Shame

O the Bitter Shame and Sorrow

Defend Me, Lord, from Shame

Author: Anonymous Meter: 6.6.8.6 D Appears in 4 hymnals Lyrics: 1. Defend me, Lord, from shame, For still I trust in ... Used With Tune: LEBANON Text Sources: The Psalter (Pittsburgh, Pennsylvania: The United Presbyterian Board of Publication, 1912), number 82.
Defend Me, Lord, from Shame

[From shame and insult set me free]

O the Bitter Shame and Sorrow 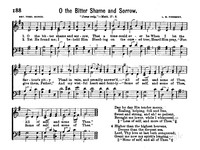 Aint It a Shame 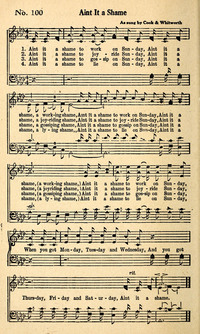 Lord of the cross of shame

1823 - 1876 Person Name: J. B. Dykes Composer of "ST. CROSS" in Rejoice in the Lord As a young child John Bacchus Dykes (b. Kingston-upon-Hull' England, 1823; d. Ticehurst, Sussex, England, 1876) took violin and piano lessons. At the age of ten he became the organist of St. John's in Hull, where his grandfather was vicar. After receiving a classics degree from St. Catherine College, Cambridge, England, he was ordained in the Church of England in 1847. In 1849 he became the precentor and choir director at Durham Cathedral, where he introduced reforms in the choir by insisting on consistent attendance, increasing rehearsals, and initiating music festivals. He served the parish of St. Oswald in Durham from 1862 until the year of his death. To the chagrin of his bishop, Dykes favored the high church practices associated with the Oxford Movement (choir robes, incense, and the like). A number of his three hundred hymn tunes are still respected as durable examples of Victorian hymnody. Most of his tunes were first published in Chope's Congregational Hymn and Tune Book (1857) and in early editions of the famous British hymnal, Hymns Ancient and Modern. Bert Polman
John Bacchus Dykes

1823 - 1889 Person Name: W. H. Monk, Mus. Doc. Composer of "[Oh, the bitter shame and sorrow]" in The Hymnal, Revised and Enlarged, as adopted by the General Convention of the Protestant Episcopal Church in the United States of America in the year of our Lord 1892 William H. Monk (b. Brompton, London, England, 1823; d. London, 1889) is best known for his music editing of Hymns Ancient and Modern (1861, 1868; 1875, and 1889 editions). He also adapted music from plainsong and added accompaniments for Introits for Use Throughout the Year, a book issued with that famous hymnal. Beginning in his teenage years, Monk held a number of musical positions. He became choirmaster at King's College in London in 1847 and was organist and choirmaster at St. Matthias, Stoke Newington, from 1852 to 1889, where he was influenced by the Oxford Movement. At St. Matthias, Monk also began daily choral services with the choir leading the congregation in music chosen according to the church year, including psalms chanted to plainsong. He composed over fifty hymn tunes and edited The Scottish Hymnal (1872 edition) and Wordsworth's Hymns for the Holy Year (1862) as well as the periodical Parish Choir (1840-1851). Bert Polman
William Henry Monk

Editors: Theodore Monod Description: The SmallChurchMusic site was launched in 2006, growing out of the requests from those struggling to provide suitable music for their services and meetings. Rev. Clyde McLennan was ordained in mid 1960’s and was a pastor in many small Australian country areas, and therefore was acutely aware of this music problem. Having also been trained as a Pipe Organist, recordings on site (which are a subset of the smallchurchmusic.com site) are all actually played by Clyde, and also include piano and piano with organ versions. All recordings are in MP3 format. Churches all around the world use the recordings, with downloads averaging over 60,000 per month. The recordings normally have an introduction, several verses and a slowdown on the last verse. Users are encouraged to use software: Audacity (http://www.audacityteam.org) or Song Surgeon (http://songsurgeon.com) (see http://scm-audacity.weebly.com for more information) to adjust the MP3 number of verses, tempo and pitch to suit their local needs. Copyright notice: Rev. Clyde McLennan, performer in this collection, has assigned his performer rights in this collection to Hymnary.org. Non-commercial use of these recordings is permitted. For permission to use them for any other purposes, please contact manager@hymnary.org. Home/Music(smallchurchmusic.com) List SongsAlphabetically List Songsby Meter List Songs byTune Name About
Small Church Music