1510 - 1561 Person Name: Louis Bourgeois, c. 1510-1561 Meter: 9.8.8.9.5 Composer of "RICHIER" in Hinário para o Culto Cristão Louis Bourgeois (b. Paris, France, c. 1510; d. Paris, 1561). In both his early and later years Bourgeois wrote French songs to entertain the rich, but in the history of church music he is known especially for his contribution to the Genevan Psalter. Apparently moving to Geneva in 1541, the same year John Calvin returned to Geneva from Strasbourg, Bourgeois served as cantor and master of the choristers at both St. Pierre and St. Gervais, which is to say he was music director there under the pastoral leadership of Calvin. Bourgeois used the choristers to teach the new psalm tunes to the congregation. The extent of Bourgeois's involvement in the Genevan Psalter is a matter of scholar­ly debate. Calvin had published several partial psalters, including one in Strasbourg in 1539 and another in Geneva in 1542, with melodies by unknown composers. In 1551 another French psalter appeared in Geneva, Eighty-three Psalms of David, with texts by Marot and de Beze, and with most of the melodies by Bourgeois, who supplied thirty­ four original tunes and thirty-six revisions of older tunes. This edition was republished repeatedly, and later Bourgeois's tunes were incorporated into the complete Genevan Psalter (1562). However, his revision of some older tunes was not uniformly appreciat­ed by those who were familiar with the original versions; he was actually imprisoned overnight for some of his musical arrangements but freed after Calvin's intervention. In addition to his contribution to the 1551 Psalter, Bourgeois produced a four-part harmonization of fifty psalms, published in Lyons (1547, enlarged 1554), and wrote a textbook on singing and sight-reading, La Droit Chemin de Musique (1550). He left Geneva in 1552 and lived in Lyons and Paris for the remainder of his life. Bert Polman
Louis Bourgeois 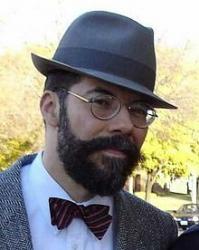