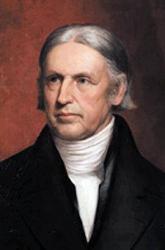 1771 - 1852 Hymnal Title: Calvin Hymnary Project Author of "Behold, what poor imperfect things" Ballou, Hosea, a celebrated leader of the sect of Universalists, was born at Richmond, New Hampshire, April 30, 1771. He was entirely self-educated, and began to preach when about 21. In 1807 he settled at Portsmouth, New Hampshire, passing to Salem, Mass., in 1815, and to Boston in 1817. He died in 1852. To the Universalist Hymns composed by different Authors, published in 1808, he contributed 199 hymns. A few of these are still used by the Universalists, but one only, and that probably his best, has passed beyond their ranks. It is:— When God descends with men to dwell. The Second Advent. Ballou also edited with Turner a second collection in 1821, and a third in his own name, 1837. [Rev. F. M. Bird, M.A.] -- John Julian, Dictionary of Hymnology (1907)
Hosea Ballou