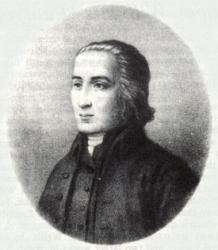 1717 - 1791 Person Name: W. W. Author (stanza 3) of "Dewch, hen ac ieuainc, dewch" in Mawl a chân = praise and song William Williams, called the "Watts of Wales," was born in 1717, at Cefn-y-coed, near Llandovery, Carmarthenshire. He originally studied medicine, but abandoned it for theology. He was ordained Deacon in the Church of England, but was refused Priest's Orders, and subsequently attached himself to the Calvinistic Methodists. For half a century he travelled in Wales, preaching the Gospel. He died in 1791. Williams composed his hymns chiefly in the Welsh language; they are still largely used by various religious bodies in the principality. Many of his hymns have appeared in English, and have been collected and published by Sedgwick. His two principal poetical works are "Hosannah to the Son of David," and "Gloria in Excelsis." --Annotations of the Hymnal, Charles Hutchins, M.A. 1872. ===================== Williams, William, of Pantycelyn, was the Sweet Singer of Wales. He was born at Cefn-y-Coed, in the Parish of Llanfair-y-bryn, near Llandovery, in 1717. He was ordained a deacon of the Established Church in 1740, by Dr. Claget, Bishop of St. Davids, and for three years he served the Curacies of Llan-wrtyd and Llanddewi-Abergwesyn. He never received Priest's Orders. He became early acquainted with the revivalist Daniel Rowlands, and for thirty-five years he preached once a month at Llanllian and Caio and Llansawel, besides the preaching journeys he took in North and South Wales. He was held in great esteem as a preacher. In 1744 his first book of hymns appeared under the title of Halleluiah, and soon ran through three editions. In1762, he published another book under the title of Y Môr o Wydr, which soon went through five editions. His son John published an excellent edition of his hymns in the year 181lines In addition to his Welsh hymns Williams also published several in English as:— (1.) Hosannah to the Son of David; or, Hymns of Praise to God, For our glorious Redemption by Christ. Some few translated from the Welsh Hymn-Book, but mostly composed on new Subjects. By William Williams. Bristol: Printed by John Grabham, in Narrow-Wine Street, 1759. This contains 51 hymns of which 11 are translated from his Welsh hymns. This little book was reprinted by D. Sedgwick in 1859. (2.) Gloria in Excelsis: or, Hymns of Praise to God and the Lamb. By W. Williams . . . Carmarthen. Printed for the Author by John Ross, removed to Priory Street, near the Church, M.DCC.LXXI. This contains 70 hymns, not including parts. From these volumes the following hymns are in common use:— i. From the Hosannah, 1759:— 1. Jesus, my Saviour is enough. Jesus, All in All. 2. My God, my God, Who art my all. Communion with God desired. 3. The enormous load of human guilt. God's love unspeakable. ii. From the Gloria in Excelsis, 1772. 4. Awake, my soul, and rise. Passiontide. 5. Beneath Thy Cross I lay me down. Passiontide. 6. Hark! the voice of my Beloved. The Voice of Jesus. 7. Jesus, lead us with Thy power. Divine Guidance Desired. Sometimes given as "Father, lead us with Thy power." 8. Jesus, Whose Almighty sceptre. Jesus as King. 9. Saviour, look on Thy beloved. The Help of Jesus desired. 10. White and ruddy is my Beloved. Beauties of Jesus. Williams is most widely known through his two hymns, "Guide me, O Thou great Jehovah," and "O'er those gloomy hills of darkness." Williams died at Pantycelyn, Jan. 11, 1791. [Rev. W. Glanffrwd Thomas] -- John Julian, Dictionary of Hymnology (1907) ================= See also in: Hymn Writers of the Church
William Williams

1716 - 1776 Person Name: M. R. Author (stanza 1) of "Dewch, hen ac ieuainc, dewch" in Mawl a chân = praise and song Rhys, Morgan, a famous Welsh hymnwriter of the last century. He published several collections of hymns under quaint titles. Golwg o ben Nebo ar wlad yr Addewid (A View of the land of promise from the top of Mr. Nebo). Frwyd Ysbrydal (The Spiritual Warfare). Graddfanan y Credadyn, &c. (The Groanings of the Believer). He died in 1776, and was buried at Llanfynydd Church, in Caermarthenshire. [Rev. W. Glenffrwd Thomas] --John Julian, Dictionary of Hymnology (1907) ================== Rhys, Morgan, p. 959, i. A short notice of this writer (a schoolmaster in connection with the Calvinistic Methodists), is given in H. Elvet Lewis's Sweet Singers of Wales, 1889, together with a few translations into English of his hymns. --John Julian, Dictionary of Hymnology, Appendix, Part II (1907)
Morgan Rhys