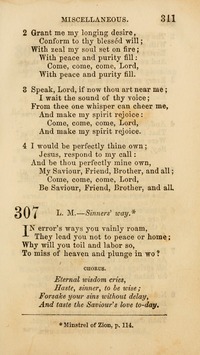 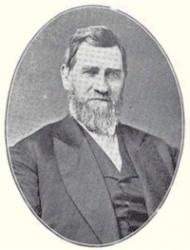 1811 - 1877 Hymnal Title: Calvin Hymnary Project Author of "Eternal wisdom cries, Hast sinner" Hunter, William, D.D, son of John Hunter, was born near Ballymoney, County Antrim, Ireland, May 26, 1811. He removed to America in 1817, and entered Madison College in 1830. For some time he edited the Conference Journal, and the Christian Advocate. In 1855 he was appointed Professor of Hebrew in Alleghany College: and subsequently Minister of the Methodist Episcopal Church, at Alliance, Stark Country, Ohio. He died in 1877. He edited Minstrel of Zion, 1845; Select Melodies, 1851; and Songs of Devotion, 1859. His hymns, over 125 in all, appeared in these works. Some of these have been translated into various Indian languages. The best known are :— 1. A home in heaven; what a joyful thought. Heaven a Home. From his Minstrel of Zion, 1845, into the Methodist Scholar's Hymn Book, London, 1870, &c. 2. Joyfully, joyfully onward I [we] move. Pressing towards Heaven. This hymn is usually dated 1843. It was given in his Minstrel of Zion, 1845, and Select Melodies, 1851, and his Songs of Devotion, 1859. It has attained to great popularity. Two forms of the hymn are current, the original, where the second stanza begins "Friends fondly cherished, have passed on before"; and the altered form, where it reads: “Teachers and Scholars have passed on before." Both texts are given in W. F. Stevenson's Hymns for Church & Home, 1873, Nos. 79, 80, c. 3. The [My] heavenly home is bright and fair. Pressing towards Heaven. From his Minstrel of Zion, 1845, into the Cottage Melodies, New York, 1859, and later collections. 4. The Great Physician now is near. Christ the Physician. From his Songs of Devotion, 1859 5. Who shall forbid our grateful[chastened]woe? This hymn, written in 1843, was published in his Minstrel of Zion, 1845, and in his Songs of Devotion, 1859. [ Rev. F. M. Bird, M.A.] --John Julian, Dictionary of Hymnology (1907)
William Hunter