[Merry the hearts that have gathered today]

Composer: I. Baltzell Appears in 3 hymnals Hymnal Title: Temple Echoes Incipit: 34453 51765 54446 Used With Text: Happy Are We
[Merry the hearts that have gathered today] 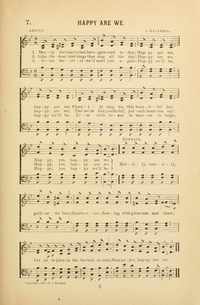 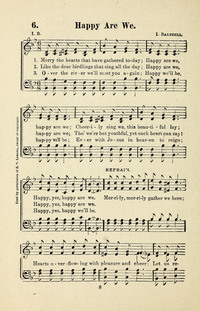 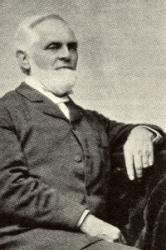 1832 - 1893 Person Name: I. B. Hymnal Title: Temple Echoes Author of "Happy Are We" in Temple Echoes Baltzell, Isaiah. (near Frederick, Maryland, November 26, 1832--January 16, 1893, Frederick). He was educated in the common schools, and at New Windsor Academy, Carroll County, Maryland. In 1859 he married Cecilia Caroline James at Mountain Jackson, Virginia. Originally a Lutheran, he joined the United Brethren Church in 1847, was licensed to preach by the Virginia Conference in 1854, and ordained in 1856. In 1862 he joined the Pennsylvania Conference. He was presiding elder from 1875 to 1880, and from 1883 to 1889. He was a delegate to three General Conferences, and was a trustee of Otterbein University. In 1873 he was appointed by the General Conference a member of the committee to superintend the publication of Hymns for the Sanctuary. His first compilation was Revival Songster (Baltimore, 1859). He was joint editor, with G.W.M. Rigor, or Choral Gems (1871); joint editor, with E.S. Lorenz, of Heavenly Carols, Songs of Grace, Gates of Praise, Songs of Cheer, Songs of the Kingdom, Holy Voices, Songs of Refreshing, Notes of Triumph, Garnered Sheaves, Songs of the Morning, and The Master's Praise. He was also author of music and services for special occasions, and the editor and publisher of Carols of Praise. See: Shuey, W.A. (1892). Manual of the United Brethren Publishing House; Historical and Descriptive: 243-244. Some of his hymns bear the pseudonym Amicus. --Harry Eskew, DNAH Archives
I. Baltzell