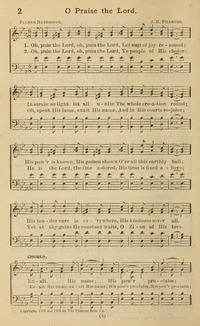 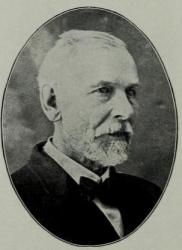 1844 - 1932 Hymnal Title: Calvin Hymnary Project Author of "O Praise the Lord" Rv Palmer Hartsough USA 1844-1932. Born in Redford, MI, he attended Kalamazoo College and Michigan State Normal school (later MSU). He became an author, editor, lyricist, and librettist. After working as a traveling singing teacher in MI, IL, IA, OH, KY and TN, he opened a music studio in Rock Island, IL, around 1877, also directing music at a Baptist church there. In 1893, due to his poetic abilities, he moved to Cincinnati, OH, and joined the Fillmore Music Company, providing texts (over 1000) for their music. He also served as music director at the Bethel Mission and the 9th Street Baptist Church. He became a traveling song evangelist in 1903, and was ordained a Baptist minister in 1906, serving in Ontario, Canada, and MI from 1914 to 1927. He then returned to Plymouth, MI, where he lived the rest of his life. He never married, but was close to his two sisters, and wrote them a weekly letter for many years. With Fillmore Company he helped publish 20 songbooks. He died in Plymouth, MI. John Perry
Palmer Hartsough

1849 - 1936 Hymnal Title: Joy and Praise Composer of "[Oh, praise the Lord, oh, praise the Lord]" in Joy and Praise James Henry Fillmore USA 1849-1936. Born at Cincinnati, OH, he helped support his family by running his father's singing school. He married Annie Eliza McKrell in 1880, and they had five children. After his father's death he and his brothers, Charles and Frederick, founded the Fillmore Brothers Music House in Cincinnati, specializing in publishing religious music. He was also an author, composer, and editor of music, composing hymn tunes, anthems, and cantatas, as well as publishing 20+ Christian songbooks and hymnals. He issued a monthly periodical “The music messsenger”, typically putting in his own hymns before publishing them in hymnbooks. Jessie Brown Pounds, also a hymnist, contributed song lyrics to the Fillmore Music House for 30 years, and many tunes were composed for her lyrics. He was instrumental in the prohibition and temperance efforts of the day. His wife died in 1913, and he took a world tour trip with single daughter, Fred (a church singer), in the early 1920s. He died in Cincinnati. His son, Henry, became a bandmaster/composer. John Perry
J. H. Fillmore