1920 - 2008 Person Name: JG Hymnal Title: Worship (3rd ed.) Composer (Gelineau tone) of "[Send forth your light and your truth]" in Worship (3rd ed.) Joseph Gelineau (1920-2008) Gelineau's translation and musical settings of the psalms have achieved nearly universal usage in the Christian church of the Western world. These psalms faithfully recapture the Hebrew poetic structure and images. To accommodate this structure his psalm tones were designed to express the asymmetrical three-line/four-line design of the psalm texts. He collaborated with R. Tournay and R. Schwab and reworked the Jerusalem Bible Psalter. Their joint effort produced the Psautier de la Bible de Jerusalem and recording Psaumes, which won the Gran Prix de L' Academie Charles Cros in 1953. The musical settings followed four years later. Shortly after, the Gregorian Institute of America published Twenty-four Psalms and Canticles, which was the premier issue of his psalms in the United States. Certainly, his text and his settings have provided a feasible and beautiful solution to the singing of the psalms that the 1963 reforms envisioned. Parishes, their cantors, and choirs were well-equipped to sing the psalms when they embarked on the Gelineau psalmody. Gelineau was active in liturgical development from the very time of his ordination in 1951. He taught at the Institut Catholique de Paris and was active in several movements leading toward Vatican II. His influence in the United States as well in Europe (he was one of the founding organizers of Universa Laus, the international church music association) is as far reaching as it is broad. Proof of that is the number of times "My shepherd is the Lord" has been reprinted and reprinted in numerous funeral worship leaflets, collections, and hymnals. His prolific career includes hundreds of compositions ranging from litanies to responsories. His setting of Psalm 106/107, "The Love of the Lord," for assembly, organ, and orchestra premiéred at the 1989 National Association of Pastoral Musicians convention in Long Beach, California. --www.giamusic.com
Joseph Gelineau 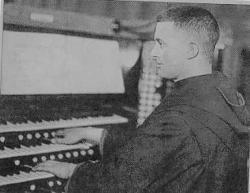 1905 - 1992 Person Name: AGM Hymnal Title: Worship (3rd ed.) Composer (Antiphon) of "[Send forth your light and your truth]" in Worship (3rd ed.) Dom Gregory Murray OSB, organist and composer, died at Downside Abbey on January 19th 1992 aged 86. he was born in Fulham, London on February 27, 1905 DOM Gregory Murray enhanced the music of the Roman Catholic Church, and latterly that of other denominations, almost by stealth. His music is sung every Sunday in thousands of churches throughout the English-speaking world: a case of everybody knowing the tune but few knowing the name of the composer. His influence through such simple music as A People's Mass (with sales of over two million copies), his psalm tones, organ music and hymn tunes reached far, although he had more or less withdrawn from public life half a century ago. Anthony Gregory Murray was educated at Westminster Cathedral Choir School when Sir Richard Terry was Master of the Music, and St Benedict's, Ealing. He was ordained in 1932 for Downside Abbey and spent most of the rest of his life there except for periods at Ealing during the war and as parish priest of Hindley, Lancashire, from 1948 to 1952. He was parish priest of St Benedict's, Stratton-on-the-Fosse, from 1952 to 1987, a position he combined with his domestic duties. In 1923 he became a fellow of the Royal College of Organists and read for the historical tripos at Cambridge, graduating in 1929. Murray was a brilliant organist, regular broadcasts from the Compton organ at Downside led to the folk tale among musicians that the abbey was permanently hooked up to the BBC. He was particularly noted for his skill at improvising. Those with acute hearing and their wits about them would frequently detect a musical quotation from another work, not necessarily sacred in nature. He was an authority on Gregorian Chant, publishing two books on the subject. It was a measure of his honesty that, once he had changed his mind about the rhythmic basis of plainsong, the second more or less contradicted the first. He disowned his Gregorian Rhythm: a Pilgrim's Progress (1934) in the October 1957 edition of The Score, later giving his reasons in Gregorian Chant According to the Manuscripts (1963). Two of his hymn tunes were published in the widely esteemed Hymns Ancient & Modern (New Standard). Outside of music his interests encompassed the gospel of St Matthew, football, cricket, tennis and chess. He complained during his last illness that the greatest privation of being sick was his inability to play the latter four, especially football. The sharp wit of his early years had mellowed to a delightful humour which he retained to the end. His over-riding interest as a musician was to provide music that would enhance the Roman Catholic liturgy. (when the Church of England later took to his music with enthusiasm he was delighted). His reflections on the place of music as a servant of the liturgy are recorded in Music and the Mass (1977). He wrote for the old Latin liturgy, but as a keen vemacularist he seized the opportunities offered by the reforms of the Second Vatican Council and continued composing until a few months before his death. He was always threatening to stop writing, once describing music to his publisher as "a bore and a chore", but he never did and his Chorale Prelude on Marienlied was published on the day his death was announced. His four books of Short Organ Interludes for Liturgical use are a blessing for parish organists. --www.nottsorganists.co.uk
Gregory Murray
Export as CSV