Switch back to the old search page.Advanced Search
Planning worship? Check out our sister site, PreachingandWorship.org, for 20+ additional resources related to your search.
Showing 1 - 4 of 4Results Per Page: 102050

Translator of "Sleep, Baby, Sleep" in The Cyber Hymnal In some hymnals, the editors noted that a hymn's author is unknown to them, and so this artificial "person" entry is used to reflect that fact. Obviously, the hymns attributed to "Author Unknown" "Unknown" or "Anonymous" could have been written by many people over a span of many centuries.
Anonymous 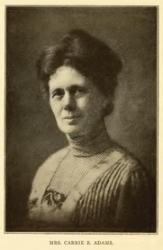 1859 - 1940 Composer of "[Sleep, baby, sleep!]" in Songs for Children Adams, Carrie Belle (Wilson). (Oxford, Ohio, July 28, 1859-1940). Father, David Wilson, song writer, teacher of music. Married, 1880 to Allyn G. Adams, moved to Terre Haute, Indiana. Director and organist, First Congregational Church; Central Christian Church. Teacher (1887-1895), Indiana State Normal School. Wrote many anthems and cantatas, secular and religious, many published by Lorenz. --Keith C. Clark, DNAH Archives =================== Mrs. Carrie B. (Wilson) Adams was born in Oxford, Ohio, July 28, 1859. Her father, Mr. David Wilson, was author of a number of songs and books, also a singing teacher of note in his day, and her mother was quite musically inclined. Her experience with her father in elementary and advanced class work, in children's and harmony classes, her years of musical participation in solo work and in accompanying, in the organization and leadership, not only of choirs, but also of great choral organizations, her close touch with singers of elementary grade, as well as those of great skill and reputation, have given her a breadth of musical thought and practical power of adaptation that constantly enrich her work of composition. Miss Carrie B. Wilson became Mrs. Allyn G. Adams in 1880, and soon after located in Terre Haute, Ind., where her husband was a leading bass singer and interested in large commercial enterprises. Mrs. Adams soon became a leading figure in the musical life of that enterprising city, and has been actively identified with the Choral Club, Treble Clef Club, Rose Polytechnic Glee Club, First Congregational Church and Central Christian Church choirs, as director, chorister and organist. From 1887 to 1895 she occupied the chair of music in the Indiana State Normal School. Her first anthem was published in 1876. Among her best known publications are four anthem books — "Anthem Annual, Nos. 1 and 2," and " Royal Anthems, Nos. 1 and 2" ; "Music for Common Schools"; two sacred cantatas, "Redeemer and King " and "Easter Praise" ; an operetta for church and school use, "The National Flower"; a group of Shakespeare songs from "As You Like it," and a large number of anthems, male choruses, ladies' quartets and miscellaneous pieces in octavo form. http://archive.org/stream/biographyofgospe00hall/biographyofgospe00hall_djvu.txt
Carrie B. Adams 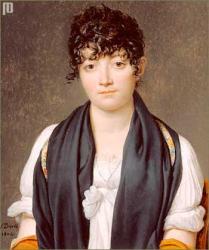 1779 - 1826 Person Name: Louise Reichardt Composer of "[Sleep, baby, sleep! Thy Father guards the sheep]" in Primary School Carols Caroline Luise Reichardt Germany 1779-1826. Born in Berlin to middle class parents and musical composers, she received some formal education and musical training from her father and his friends, but also was self-taught. Her grandfather was Konzertmeister, and her father was Kapellmeister at the court of Frederick, the Great. Louise was musical and had a good voice. She played piano and sang. In 1800 four of her own compositions were published along with a collection of her father’s songs. The Reichardts entertained well-known literary figures of the day. She later used poetry from Phillip Ludwig Achim von Arnim in a collection of 12 songs she composed. In 1809 she settled in Hamburg, Germany, where she made a living as a singing teacher and composed music. She also organized and directed a women’s chorus. She did behind-the-scenes conducting of music when she could. She was known for her untiring efforts in the production of Handel choral works, translating and preparing texts and choruses to be conducted by male counterparts. She also translated the Latin works of Hasse and Graun into German. She played a significant role in the formation of the German choral movement, a driving force in 19th century musical nationalism. She composed 75+ songs and choral pieces in various styles and accompaniments. Her husband-to-be, Friedrich August Eschen, died suddenly on the eve before their wedding. Her second husband-to-be, a painter, Franz Gareis, also died before their wedding. She died at Hamburg, Germany. John Perry
Luise Reichardt