He Answered Never a Word 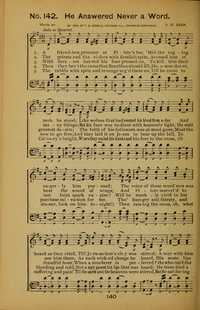 A friendless prisoner at Pilate's bar

1 A friendless pris’ner at Pilate’s bar,
’Mid the raging mob He stood;
Like wolves that had scented His blood from afar
And eagerly Him pursued;
The voice of these murd’rers was heard as they cried,
Till Jerusalem’s city was stirred;
“Away with Him, let Him be crucified”;
But He answered never a word.


2 The priests and the elders with fiendish spite,
Accused Him of many things;
But His face was radiant with heavenly light,
He could hear the sound of wings;
And Pilate marveled to see Him there,
As each wicked charge he heard,
His mute lips moved as in silent prayer,
But He answered never a word.


3 With fiercest hatred his foes pressed on,
To kill Him their greatest desire;
The faith of His foll’wers was almost gone,
Must the last faint spark expire?
Will He meekly yield in His dreadful hour,
When a murderer is preferred?
He who raised the dead, has He lost His pow’r?
But He answered never a word.


4 Then they brought the cross that Barabbas should fill,
He, a murderer, now to go free;
And they laid in on Jesus to bear up the hill,
To purchase salvation for me;
Though hungry and thirsty, and bleeding and cold,
Not a sigh passed His lips that was heard;
He trembled a moment, then sank to the ground,
But He answered never a word.


5 The rabble with spite and revenge urged them on,
Till He came to Calvary’s brow,
Where they nailed His hands and His feet to the cross—
O sinner, look on him now!
Then raising the cross, oh, what suff’ring and pain!
Till the earth and the heavens were stirred,
But the suffering Jesus with meekness endured,
But He answered never a word.


6 But there hung by His side a thief, broken and sad,
With sins that were all his own,
And he cried, “Dear Lord, remember me
When Thou sittest on Thy throne”;
And the Savior turned and looked upon him,
His compassion deep was stirred;
And peace, sweet peace He shed o’er that soul—
He could answer him with a word.

[A friendless prisoner at Pilate's bar]

All tunes published with 'He Answered Never a Word'^ top 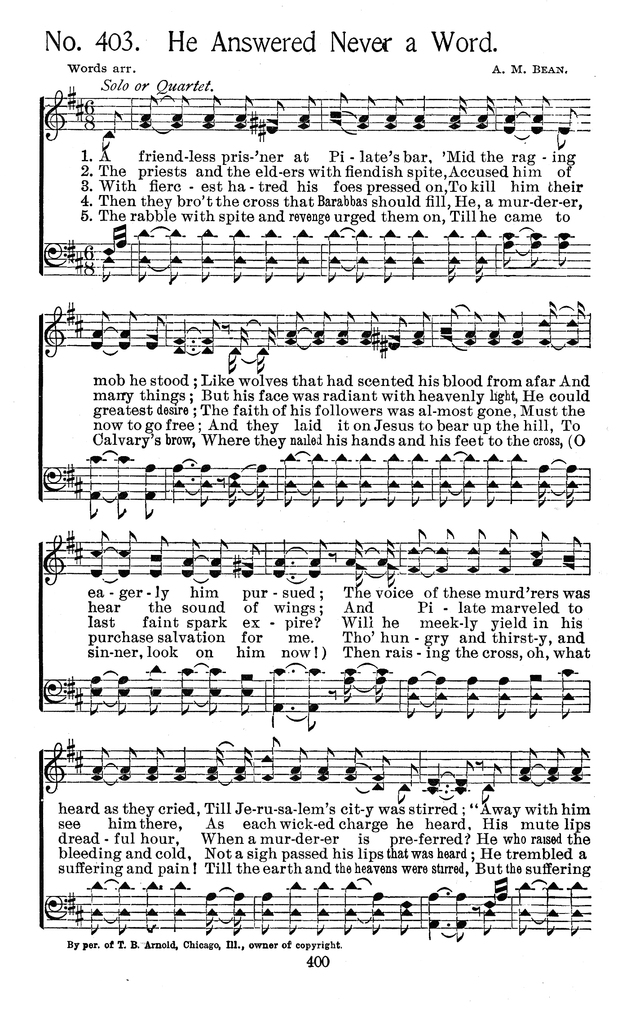