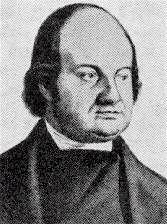 Spitta, Carl Johann Philipp, D.D., was born Aug. 1, 1801, at Hannover, where his father, Lebrecht Wilhelm Gottfried Spitta, was then living, as bookkeeper and teacher of the French language. In his eleventh year Spitta fell into a severe illness, which lasted for four years, and so threw him back that his mother (the father died in 1805) abandoned the idea of a professional career, and apprenticed him to a watchmaker. This occupation did not prove at all congenial to him, but he would not confess his dislike, and his family were ignorant of it till an old friend, who was trying to comfort him after the death of a younger brother, discovered his true feelings. The younger brother had been preparing for ordination, and so Carl was now invited… Go to person page >
^ top


[Close to Thee, my blessed Savior]