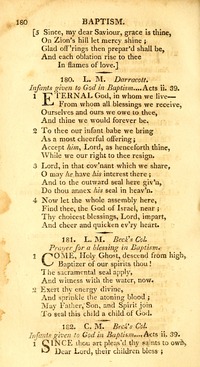 Come, Holy Ghost, descend from high. [Holy Baptism.] This cento, in 2 stanzas of 4 lines, appeared in A. M. Toplady's Psalms & Hymns, 1776, No. 99. It is composed of stanza i. of C. Wesley's "Come Father, Son, and Holy Ghost, Honour the means," &c, as above, but slightly altered; and stanza ii. probably by Toplady. This was repeated in T. Beck's (q. v.) Hymns, &c, 1782. Iti Bickersteth's Christian Psalmody, 1833, it is given in error as of Beck's composing, and this error is repeated in later collections. 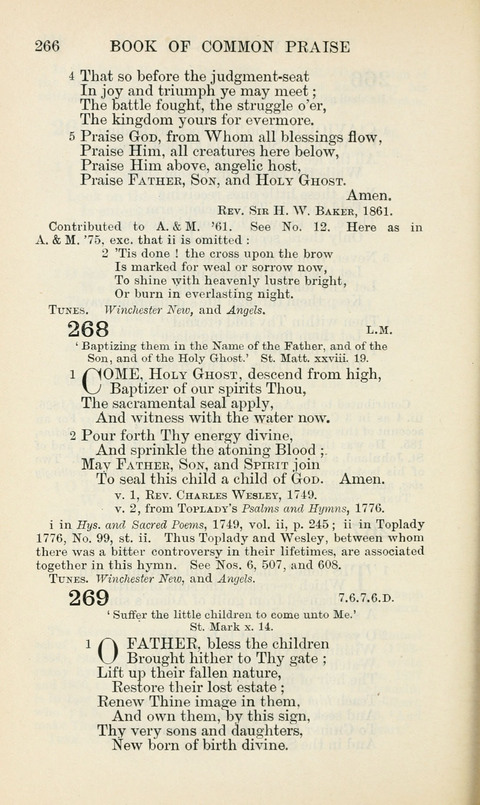 View Page
The Book of Common Praise: being the Hymn Book of the Church of England in Canada. Annotated edition (1909), p.266
^ top

A Choice Selection of Hymns and Spiritual Songs #L

A New Selection of Nearly Eight Hundred Evangelical Hymns, from More than 200 Authors in England, Scotland, Ireland, & America, including a great number of originals, alphabetically arranged #181

A New Selection of Seven Hundred Evangelical Hymns ... intended as a Supplement to Dr. Watts's Psalms and Tunes #181

Hymns, Selected and Original, for Sunday Schools of the Evangelical Lutheran Church #d58

Psalms and Hymns Adapted to Social, Private and Public Worship in the Presbyterian Church in the U.S.A. #d126

The Book of Common Praise #268

The Hymnal Companion to the Book of Common Prayer with accompanying tunes (3rd ed., rev. and enl.) #456