Faith is a precious grace 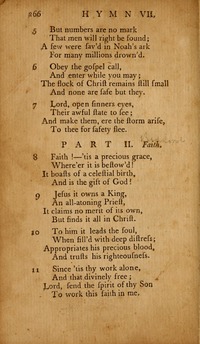 Faith is a precious grace

8 Faith! - 'tis a precious grace,
Where'er it is bestow;d!
It boasts of a celestial birth,
And is the gift of God!


9 Jesus it owns a King,
An all-atoning Priest,
It claims no merit of its own,
But finds it all in Christ.


10 To him it leads the soul,
When fill'd with deep distress;
Appropriates his precious blood,
And trusts his righteousness.


11 Since 'tis thy work alone,
And that divinely free;
Lord, send the spirit of thy Son
To work this faith in me.

Source: The Psalms of David: with hymns and spiritual songs: also, the catechism, confession of faith, and liturgy of the Reformed Church in the Netherlands #H7.II

Faith, 'tis a precious gift. B. Beddome. [Faith described.] Of this popular hymn various forms are in common use both in Great Britain and America as follows:—
1. The original, which was given in the Bristol Baptist Collection of Ash & Evans, 1769, No. 232, in 4 stanzas of 4 lines. This was repeated in Rippon's Selection, 1787, and later editions, and several modern hymn-books.
2. The text as in R. Hall's posthumous edition of Beddome's Hymns, 1817, No. 165, where after stanza ii. alterations are introduced, and another stanza (iv.) is added. This text is given in the Baptist Psalms & Hymns, 1858.
3. "Faith is a precious gift." This is an altered form of the hymn, in Dr. Alexander's Augustine Hymn Book, 1849-65, partly from the 1769, and partly from the 1817 texts; and in the American Baptist Praise Book, 1871, from the 1769 text.
4. "Faith is the gift of God," in Snepp's Songs of Grace & Glory, 1872, is an alteration of the 1817 text in 5 stanzas.
Taken in its various forms this hymn is very extensively used. 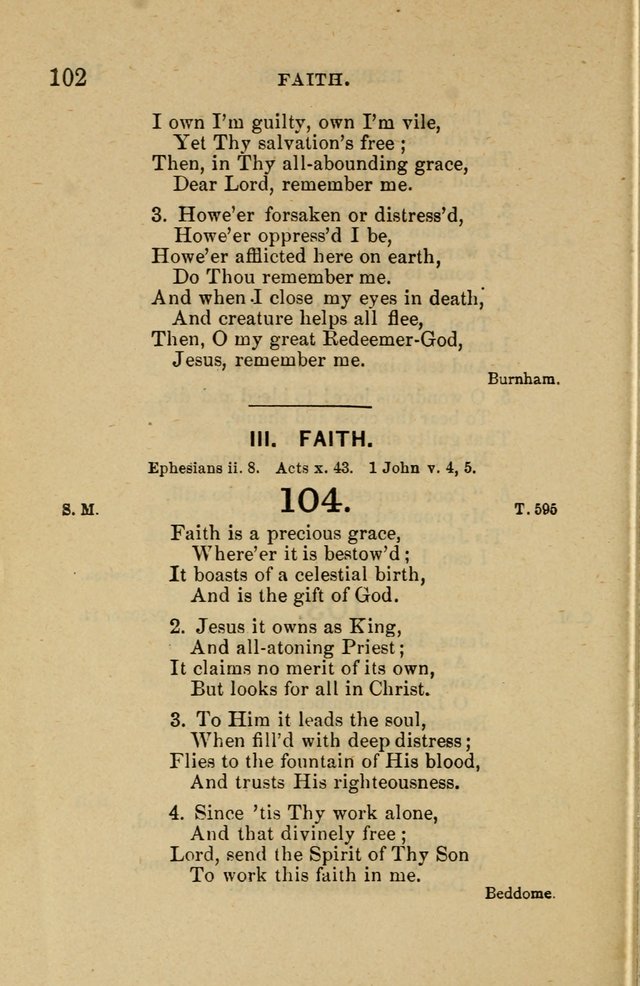 A Baptist Hymn Book, Designed Especially for the Regular Baptist Church and All Lovers of Truth #d192

A Choice Selection of Evangelical Hymns, from various authors #269

A Collection of Evangelical Hymns #d48

A Collection of Evangelical Hymns; made from Different Authors and Collections for the English Lutheran Church in New York #d63

A Collection of Hymns, for the use of the United Brethren in Christ #278

A Collection of Hymns, for the use of the Wesleyan Methodist Connection of America. #142

A New and Choice Selection of Hymns and Spiritual Songs for the Use of the Regular Baptist Church. 10th ed. #d140

A New Selection of Hymns; designed for the use of conference meetings, private circles, and congregations, as a supplement to Dr. Watts' Psalms and Hymns #293

A New Selection of Nearly Eight Hundred Evangelical Hymns, from More than 200 Authors in England, Scotland, Ireland, & America, including a great number of originals, alphabetically arranged #295

A New Selection of Psalms and Hymns from the Most Approved Authors, Adapted to Public and Private Worship. 2nd ed. #d129

A New Selection of Psalms, Hymns and Spiritual Songs #163

A New Selection of Seven Hundred Evangelical Hymns ... intended as a Supplement to Dr. Watts's Psalms and Tunes #295

A Pastor's Selection of Hymns and Tunes #237

A Selection of Hymns #d61

A Selection of Hymns and Spiritual Songs #H.CXXX

A Selection of Hymns and Spiritual Songs #H.CXXX

A Selection of Hymns from the Best Authors, intended to be an Appendix to Dr. Watts' Psalms & Hymns. 2nd Baltimore ed. #aCCXVII

A Selection of Hymns from the Best Authors. #217a

Book of Hymns and Tunes, comprising the psalms and hymns for the worship of God, approved by the general assembly of 1866, arranged with appropriate tunes... by authority of the assembly of 1873 #251c

Church Hymn Book; consisting of hymns and psalms, original and selected. adapted to public worship and many other occasions. 2nd ed. #419

Fulton Street Hymn Book, for the use of union prayer meetings, Sabbath schools and families #196

Hymns and Offices of Worship #104

Hymns for Schools and Families #d26

Hymns for Youth, Suitable to be Used in Sabbath and Parochial Schools #114

Hymns, Selected from Various Authors, for the Use of Young Persons 3rd Am. from 9th London ed. #d60

Hymns, Selected from Various Authors, for the Use of Young Persons #d52

Melodies of the Church #d236

Offices of Worship and Hymns #104

Psalms and Hymns Adapted to Social, Private and Public Worship in the Presbyterian Church in the U.S.A. #d189

Psalms and Hymns for the Worship of God #d184

Psalms and Hymns, for the Use of the German Reformed Church, in the United States of America. (2nd ed.) #220

Public, Parlour, and Cottage Hymns. A New Selection #I.34

Select Hymns from Other Authors, Selected Harmony Together with Directions for Musical Expression. 2nd ed. #a44

Selection of Hymns from the Best Authors, intended to be an Appendix to Dr. Watts' Psalms and Hymns. (1st Am. ed.) #CCXVII

The Devotional Hymn and Tune Book #543

The Ebenezer Selection of Hymns and Spiritual Songs, with an appendix Consisting of Miscellaneous Pieces. 6th ed. #d144

The Psalms and Hymns, with the Catechism, Confession of Faith, and Liturgy, of the Reformed Dutch Church in North America #7b

The Psalms and Hymns, with the Doctrinal Standards and Liturgy of the Reformed Protestant Dutch Church in North America #H404

The Psalms and Hymns #7b

The Psalms of David #H7.II