Fill Our Mouths With Laughter 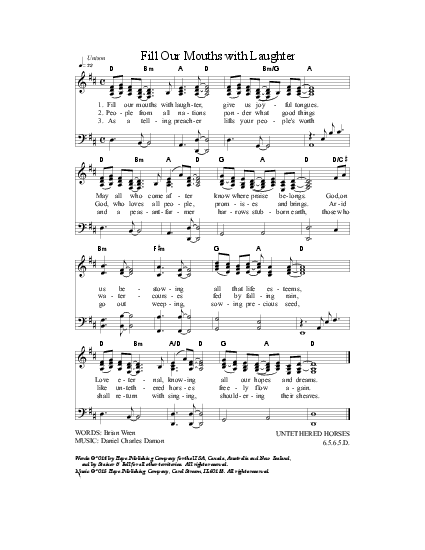 Fill our mouths with laughter

Source: New Hymns of Hope #60
(This is the only representative text available.)^ top

Brian Wren (b. Romford, Essex, England, 1936) is a major British figure in the revival of contemporary hymn writing. He studied French literature at New College and theology at Mansfield College in Oxford, England. Ordained in 1965, he was pastor of the Congregational Church (now United Reformed) in Hockley and Hawkwell, Essex, from 1965 to 1970. He worked for the British Council of Churches and several other organizations involved in fighting poverty and promoting peace and justice. This work resulted in his writing of Education for Justice (1977) and Patriotism and Peace (1983). With a ministry throughout the English-speaking world, Wren now resides in the United States where he is active as a freelance lecturer, preacher, and full-time h… Go to person page >
^ top

All tunes published with 'Fill Our Mouths With Laughter'^ top