Give thanks to God, for he is good, His mercy ever flows 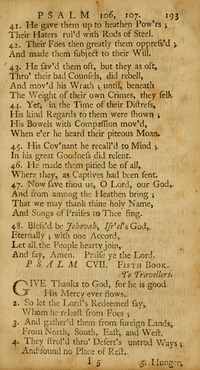 Give thanks to God, for he is good, His mercy ever flows


1. Give thanks to God, for he is good
His mercy ever flows,
2. So let the Lord's redeemed say,
Whom he released from foes;
3. And gathered them from foreign lands,
From north, south, east, and west.
4. They strolled through desert's untrod ways;
And found no place of rest.


5. Hunger, and thirst, their fainting souls
Did grievously oppress.
6. To God, in trouble, then they cried,
Who freed them from distress.
7. He led them forth in a right way,
And was their faithful guide;
Till they arrived at cities, where
Their wants were all supplied.


8. Let all with thanks, Jehovah praise,
And make his goodness known;
For he among the sons of men,
Works wonderful hath done.
9. The strong desire of longing souls
He kindly satisfies;
With fruits of his benignity,
The hungry soul supplies.


10. Who sit in darkness, and death's shade,
With grief, and chains, bowed down:
11. Because God's word, and council they
Dispised, and would not own:
12. He humbled their proud hearts with toil,
They fell, and none could save.
13. To God, in trouble, then they cried,
And he deliverance gave.


14. Their darkness, and death's shade, he changed
To light, by his kind word;
He broke their galling bands in twain,
And liberty restored.
15. Let all, with thanks Jehovah praise
And make his goodness known;
For he, among the sons of men,
Works wonderful hath done.


16. For by his strength, the gates of brass
Are into pieces broke;
The massy bars of iron are cut,
Asunder by his stroke.


Third Part. To the Sick:


17. Fools rashly break through sacred laws,
To gratify their sense;
Till with diseases they're chastised,
To punish their offense.
18. Their soul a painful loathing feels
To every kind of meat;
And they, their near approaches make
To death's unfriendly gate.


19. To God, in trouble, then they cry;
Who their distress relieves.
20. His sovereign word their sickness heals,
And them from death reprieves.
21. Let all, with thanks, Jehovah praise,
And make his goodness known;
For he among the sons of men,
Works wonderful hath done.


22. To him, let all their sacrifice,
With thankful hearts, be brought;
Declare with joy, to all the world,
What God, for them, hath wrought.


23. Who sail in ships o'er mighty seas,
And hope great gain to reap:
24. These do behold Jehovah's work;
His wonders in the deep.
25. He speaks; and stormy winds arise;
Like mounts, the billows rear.
26. To heaven they climb, then sink in gulfs;
Their soul dissolves with fear.


27. They reel, and stagger, drunkard like,
Terrors their minds oppress.
28. To God in trouble, then they cry,
Who frees them from distress.
29.. He stills the winds, and calms the seas,
And quells their rougher sport.
3O. They're glad of rest; he brings them safe,
To their desired port.


51. Let all, with thanks, Jehovah praise,
And make his goodness known;
For he, among the sons of men,
Works wonderful hath done.
32. Let them, in private companies.
His honor highly raise;
And where the assembled elders meet,
Unite to spread his praise.


33. Rivers he turns to desert sands;
And dries the fountains heads.
34. Provoked by daring crimes, with salt;
The fruitful soil he spreads.
35. He turns the desert into pools;
Dry ground, a springing well.
36. The hungry there he seats, who build,
A city where they dwell,


37. They sow their fields, and vineyards plant,
Which bring increased stocks.
3S. His blessing multiplies their race;
Nor, lessens he their flocks.
39, But when they sin, they're greatly thinned,
And soon brought low again;
By foreign, and domestic ills,
Oppressed, and filled with pain.


40. On princes, who provoke his wrath,
He pours contempt, and scorn;
He makes them traverse trackless wastes,
Unpitied, and forlorn.
41. The humble poor he seats om high,
And doth from trouble keep;
He makes his families increase,
Like fruitful flocks of sheep.


42. The just shall see, and shall rejoice;
But th' impious silent grow.
43. The wise will these events observe;
And God's great goodness know. 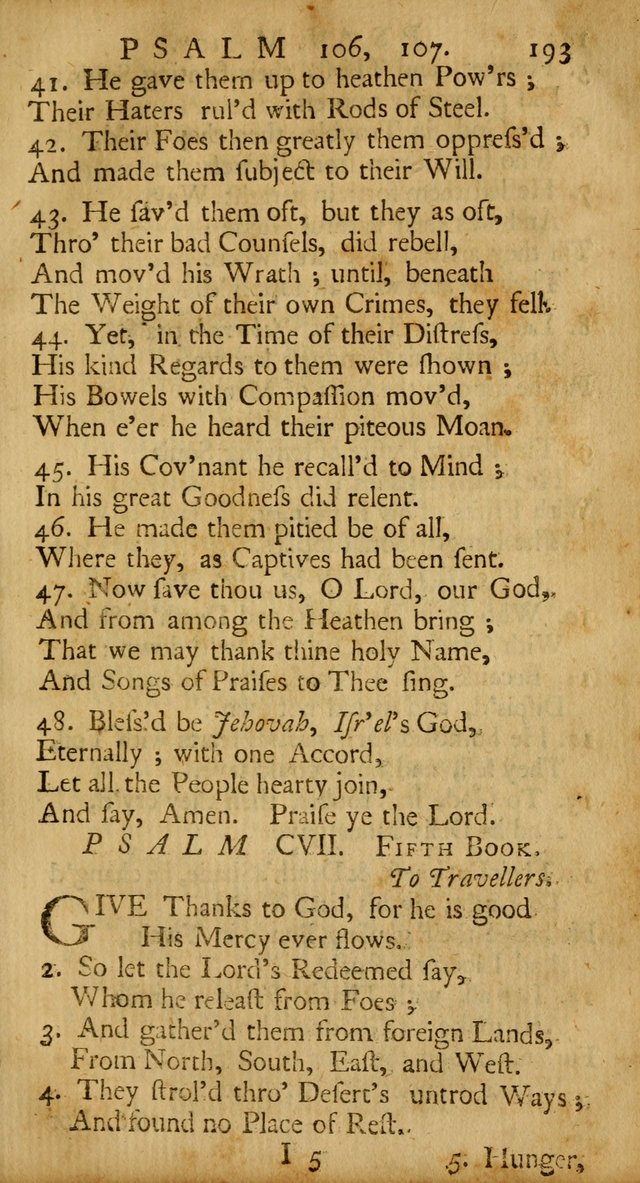 View Page
A New Version of the Psalms of David: Fitted to the Tunes Used in the Churches, With Several Hymns Out of the Old, and New, Testament (1752), p.204
^ top

A New Version of the Psalms of David #193