He dies, the Heavenly Lover dies

1 He dies, the heav'nly lover dies,
The tidings strike a doleful sound!
On my poor heart-strings, deep he lies,
In the cold caverns of the ground.


3 Here's love and grief beyond degree,
The Lord of glory dies for men;
But lo! what sudden joys I see,
Jesus the dead, revives again!


4 The rising God forsakes his tomb,
Up to his father's court he flies;
Cherubic legions guard him home,
And shout him welcome to the skies.

Source: Divine Hymns or Spiritual Songs, for the use of religious assemblies and private Christians: being a collection #XV

He dies! the Heavenly Lover dies. I. Watts. [Passiontide.] First published in his Horae Lyricae, 2nd edition, 1709, in 6 stanzas of 4 lines, and headed, "Christ Dying, Rising, and Reigning." In 1753, J. Wesley reprinted it in full, and without alteration, in his Select Hymns for the Use of Christians of all Denominations, 1753; and it was also adopted by others. The popular form of the text is that given to it by M. Madan in his Psalms & Hymns, 1760, No. 114, which reads (the italics being Madan's alterations):—

He dies! the Friend of Sinner's dies!
Lo! Salem's daughters weep around!
A solemn darkness veils the skies;
A sudden trembling shakes the ground;
Come saints and drop a tear or two,
For Him who groan'd beneath your load;
He shed a thousand drops for you,
A thousand drops of richer blood!
Here's love and grief beyond degree,
The Lord of glory dies for men!
But lo! what sudden joys we see!
Jesus, the dead, revives again!
The rising God forsakes the tomb !
(The tomb in vain forbids His rise!)
Cherubic legions guard Him home,
And shout Him welcome to the skies!
Break off your tears ye saints, and tell
How high our great Deliverer reigns!
Sing how He spoil'd the hosts of hell,
And led the monster death in chains!
Say "Live for ever, wond'rous King!
Born to redeem! and strong to save"!
Then ask the monster, " Where's thy sting,
And where's thy Victory, boasting grave."

This text was repeated, with slight variations, by A. M. Toplady, in his Psalms & Hymns, 1776, No. 185, and also by other and later editors, and is, with the change of a word here and there, the received text of the hymn in G. Britain and America.
Miller (Singers & Songs of the Church, 1869), Stevenson (Methodist Hymn Book Notes, 1883), and others state that the foregoing alterations were made by J. Wesley. Wesley, however, did not include the hymn in the Wesleyan Hymn Book in 1780 in any form whatever. It was added, as altered by M. Madan, to the Wesleyan Hymn Book by the Wesleyan Conference in 1800 (i.e. nine years after Wesley's death), and must have been taken from Madan's Psalms & Hymns of 1760, or some other collections which had copied from Madan. Wesley made use of the original text in 1753 (as above); but there is no evidence to show that he ever countenanced Madan's alterations, much less claimed them as his own.
Another altered version of this hymn appeared as, "He dies! the Man of Sorrows dies," in Hall's Mitre, 1836, and is repeated in several modern collections.
--John Julian, Dictionary of Hymnology (1907)

All tunes published with 'A Dying Savior'^ top

The Psalm-singer's amusement: containing a number of fuging pieces and anthems #3 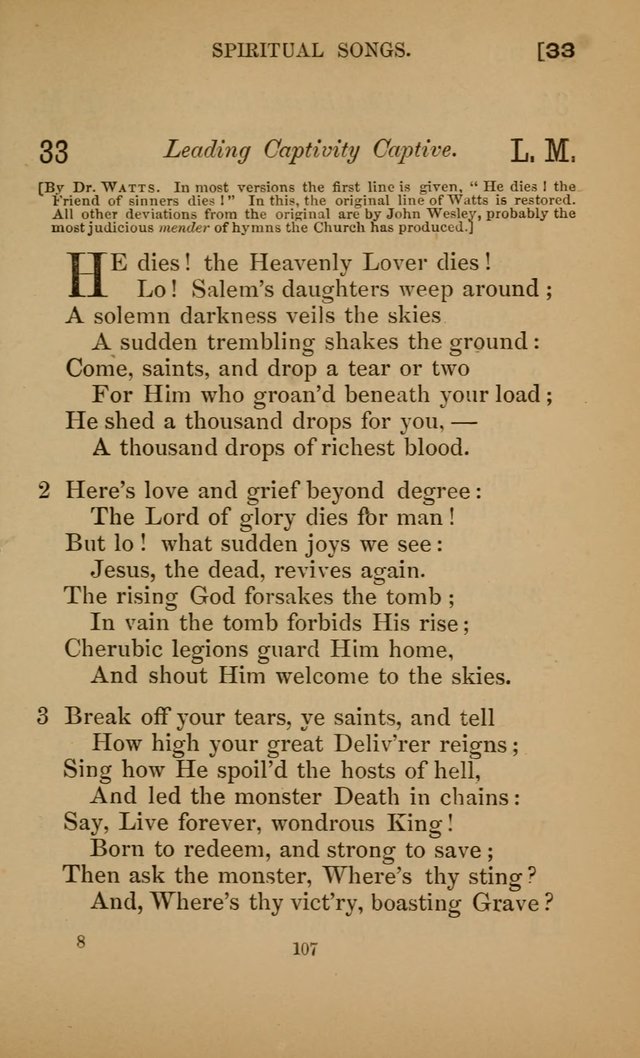 A Selection of Psalms and Hymns #127

A Selection of Psalms and Hymns #CXXVII

A Selection of Psalms and Hymns #127

Divine Hymns or Spiritual Songs, for the use of religious assemblies and private Christians #XV

Display Title: The Heavenly Lover First Line: He dies, the heav'nly lover dies Date: 1802
Divine Hymns or Spiritual Songs, for the use of religious assemblies and private Christians #XV

Hymns for All Christians #S33

The Middlesex Collection of Church Music #47