How blest is the soul

How blest is the soul 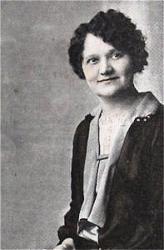 Anna Hoppe was born on May 7, 1889 in Milwaukee, Wisconsin. She left school after the eighth grade and worked as a stenographer. She began writing patriotic verses when she was very young and by the age of 25 she was writing spiritual poetry. After some of her poems appeared in the Northwestern Lutheran, a periodical of the Wisconsin Evangelical Lutheran Synod, they came to the attention of Dr. Adolf Hult of Augustana Seminary, Rock Island, Illinois. He influenced her to write her Songs for the Church Year (1928). Several hymnals include her work, which was usually set to traditional chorale melodies, although she also made a number of translations. She died on August 2, 1941 in Milwaukee, Wisconsin. NN, from Cyber Hymnal  Go to person page >
^ top