Brazilian Baptist pastor, he wrote and translated many hymns. Go to person page > 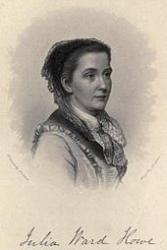 Born: May 27, 1819, New York City. Died: October 17, 1910, Middletown, Rhode Island. Buried: Mount Auburn Cemetery, Cambridge, Massachusetts. Howe, Julia, née Ward, born in New York City in 1819, and married in 1843 the American philanthropist S. G. Howe. She has taken great interest in political matters, and is well known through her prose and poetical works. Of the latter there are Passion Flower, 1854; Words of the Hour, 1856; Later Lyrics, 1866; and From Sunset Ridge, 1896. Her Battle Hymn of the Republic, "eyes have seen the glory of the coming of the Lord," was written in 1861 at the outbreak of the Civil War, and was called forth by the sight of troops for the seat of war, and published in her Later Lyrics, 1806, p. 41. It is f… Go to person page >
^ top

BATTLE HYMN OF THE REPUBLIC