Now from the garden to the cross 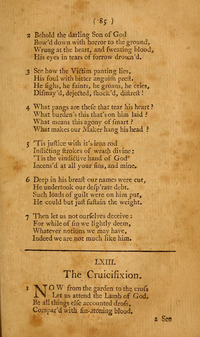 Now from the garden to the cross

1 Now from the garden to the cross,
Let us attend the Lamb of God.
Be all things else accounted dross,
Compared with sin atoning nlood.


2 See, how the patient Jesus stands,
Insulted in his lowest case:
Sinners have bound the Almighty's hands;
And spit in their Creator's face.


3 With thorns his temples gored and gashed,
Send streams of blood from every part.
His back's with knotted scourges lashed:
But sharper scourges tear his heart.


4 Nailed naked to the accursed wood;
Exposed to earth, and heaven above,
A spectacle of wounds and blood;
A prodigy of injured love!


5 Hear how his doleful cries affright
Affected angels, while they view.
His friends forsook him in the night;
And now his God forsakes him too.


6 O what a field of battle's here!
Vengeance and love their powers oppose:
Never was such a mighty pair;
Never were two such desperate foes.


7 Behold that pale, that languid face,
That drooping head, those cold dead eyes!
Behold, in sorrow and disgrace,
Our conquering Hero hangs and dies!


8 Ye that assume his sacred name,
Now tell me, what can all this mean?
What was it bruised God's harmless Lamb!
What was it pierced his soul, but sin?


The Christian's duty, exhibited in a series of hymns, 1791 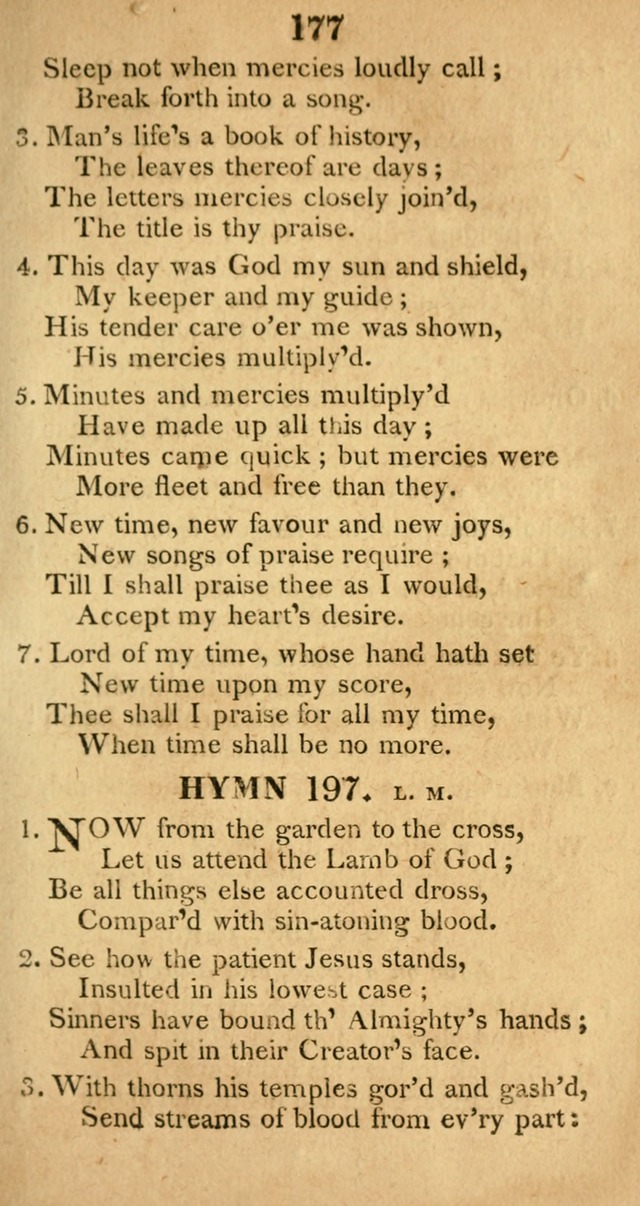 View Page
Christian's Duty, exhibited in a series of hymns: collected from various authors, designed for the worship of God, and for the edification of Christians, recommended to the serious..(4th ed. improved) (1825), p.183
^ top

A Selection of Hymns, from the Best Authors #176

Christian's Duty, exhibited in a series of hymns #197

General Collection of Hymns, Original and Selected, for Use of Christians #d216

Hymns and Psalms, Original and Modern, Selected and Revised #d226

Hymns for the Use of the Brethren in Christ #d321

Hymns, Original and Selected, for the use of Christians #d166

Hymns, Original and Selected, for the Use of Christians. 8th ed. #d180

Old School Sonnets, or a Selection of Choice Hymns #d181

The Christians Duty, exhibited, in a series of Hymns #CXCVII