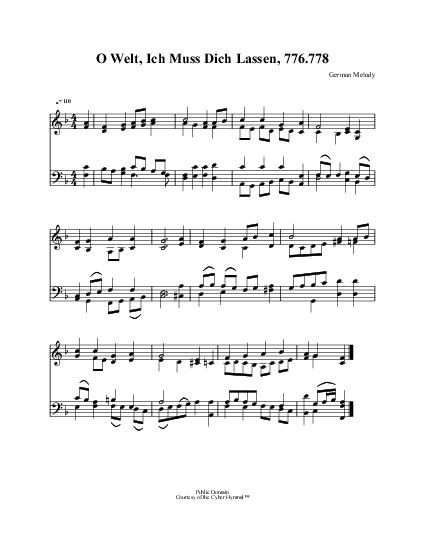 Nun ruhen alle Wälder. P. Gerhardt. [Evening.] First published in the 3rd edition, 1648, of Crüger's Praxis Pietatis Melica, No. 15, in 9 stanzas of 6 lines: reprinted in Wackernagel's edition of his Geistliche Lieder, No. 102, and Bachmann's edition, No. 2; and included as No. 529 in the Unverfälschter Liedersegen, 1851. It is one of the finest of Gerhardt's hymns. Simple and homely in its style it took great hold of the hearts of the German people. Baron Bunsen (quoted by Fischer, ii. 126) says of it in the Evangelische Kirchenzeitung, Berlin, 1830:—

"Ever since its publication this hymn has been one of the most beloved and best known hymns of devout medi¬tation over the whole of Germany. Experienced and conceived in a truly childlike popular spirit, it unites with a rare naive simplicity of expression, a loftiness of thought, a depth of Christian experience, a grace of poetry, so that for this union of qualities it must rank as an enduring masterpiece among hymns."

This hymn was a special favourite of Schiller's mother, and of the poet himself. In the time of Flat Rationalism stanza i. became the object of much shallow wit. But as Richter points out (Biog. Lexicon, 1804, p. 95), if to represent the earth as tired, and woods and trees as sleeping is not true poetry, then Virgil(Aeneid iv., 11. 522-28) was in the wrong. Stanza viii., "Breit aus die Flügel beide," has been a special favourite in Germany, and Lauxmann, in Koch viii. 194, says of it:—

"How many a Christian soul, children mostly, but also God's children in general, does this verse serve as their last evening prayer. It has often been the last prayer uttered on earth, and in many districts of Germany is used at the close of the baptismal service to commend the dear little ones to the protection of their Lord Jesus."

Nun ruhen alle Walder, p. 822, i. The translation "Now all the woods are sleeping," in the Hymns for the Use of Sherborne School, 1888, is Miss Winkworth's translation with four or five lines from E. Thring's translation of the same hymn. Both trs. are noted above. 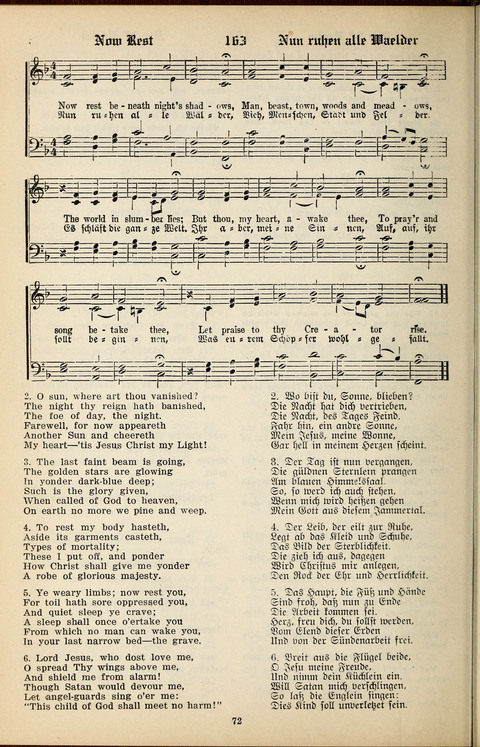