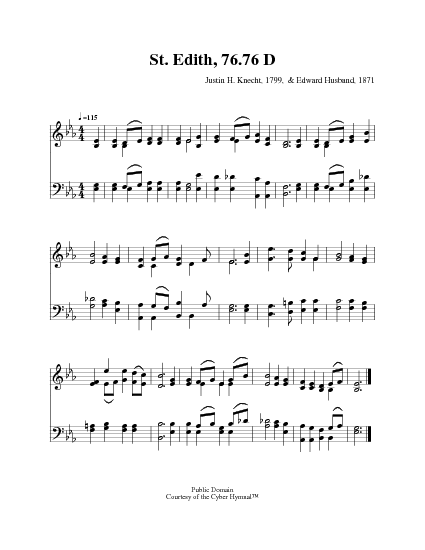 
3 *The cross that Jesus carried
He carried as your due;
The crown that Jesus weareth,
He weareth it for you.


4 *The faith by which ye see him,
The hope in which ye yearn,
The love that through all troubles
To him alone will turn,


5 *What are they but forerunners
To lead you to his sight?
What are they save the effluence
Of uncreated light?


6 The trials that beset you,
The sorrows ye endure,
The manifold temptations
That death alone can cure,


8 O happy band of pilgrims,
Look upward to the skies,
Where such a light affliction
Shall win you such a prize! 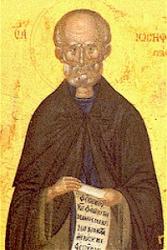 Joseph, St., the Hymnographer. A native of Sicily, and of the Sicilian school of poets is called by Dr. Neale (in his Hymns of the Eastern Church), Joseph of the Studium, in error. He left Sicily in 830 for a monastic life at Thessalonica. Thence he went to Constantinople; but left it, during the Iconoclastic persecution, for Rome. He was for many years a slave in Crete, having been captured by pirates. After regaining his liberty, he returned to Constantinople. He established there a monastery, in connection with the Church of St. John Chrysostom, which was filled with inmates by his eloquence. He was banished to the Chersonese for defence of the Icons, but was recalled by the empress Theodora, and made Sceuophylax (keeper of the sacred… Go to person page >
^ top

O happy band of pilgrims. [Pilgrims of Jesus.] Appeared in Dr. Neale's Hymns of the Eastern Church, 1862, in 8 stanzas of 4 lines, with the note by Dr. Neale, "This is merely a cento from the Canon on SS. Chrysanthus and Daria (March 19)." In his Preface to the 3rd edition, 1866, he is more explicit, and says concerning this hymn, “Safe home, safe home in port," and "Art thou weary?" they "contain so little that is from the Greek, that they ought not to have been included in this collection; in any future edition they shall appear as an Appendix."
Dr. Neale did not live to publish another edition: but in 1882 the 4th edition with notes, was issued under the editorship of S. G. Hatherly, and in it the three hymns named were "removed from the body of the work at Dr. Neale's suggestion" and included in an Appendix. Its proper designation, therefore, is By Dr. Neale, based on the Greek Canon on SS. Chrysanthius and Daria by St. Joseph the Hymnographer. It must be added that no Greek lines corresponding to those in the English hymn can be found in that Canon. Dr. Neale nevertheless found what he wanted there, that is the inspiration to write the hymn as it now stands. The use of this hymn is very extensive in all English-speaking countries.

The original form of ST. EDITH (also known as ST. HILDA) was composed in 1793 by Justin Heinrich Knecht for the text “Der neidern Menschhiet Hülle.” It was published in Vollstandige Sammlung … Choralmelodien (1799), edited by Johann Friedrich Christmann and Knecht, who composed ninety-seven o…

All tunes published with 'O happy band of pilgrims'^ top 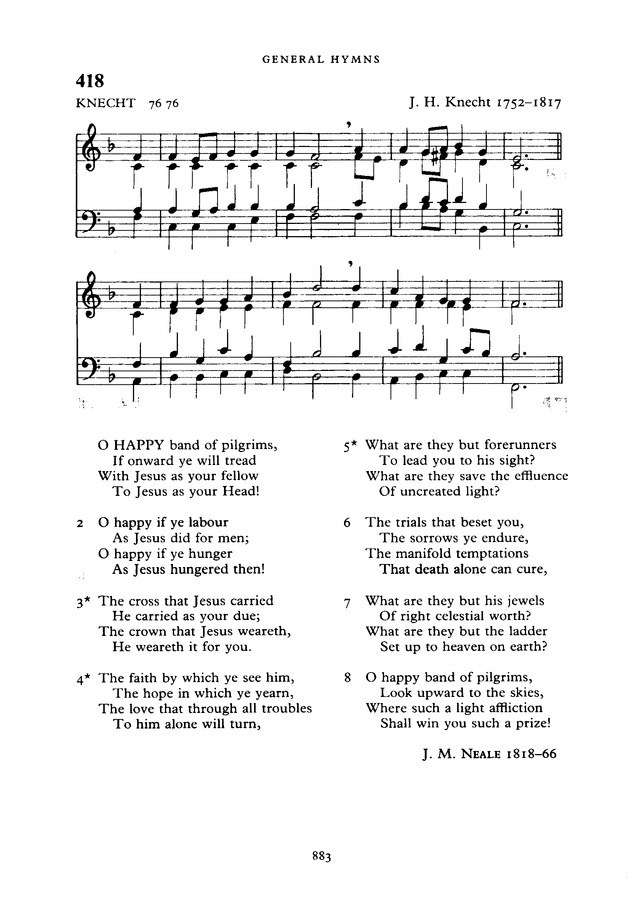