O praise the Lord, call on his name 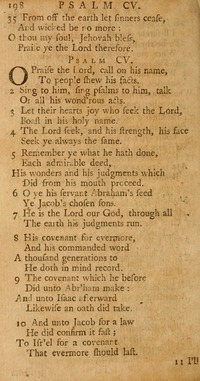 O praise the Lord, call on his name

1 O praife the Lord, call on his name,
To people shew his facts.
2 Sing to him, sing psalms to him, talk
Ox all his wond'rous acts.
3 Let their hearts joy who seek the Lord,
Boast in his holy name.
4. The Lord seek, and his strength, his face
Seek ye always the same.


5 Remember ye what he hath done,
Each admirable deed,
His wonders and his judgments which
Did from his mouth prcceed.
6 O ye his servant Abraham's seed
Ye Jacob's chosen sons.
7 He is the Lord our God, through all
The earth hie judgments run.


8 His covenant for evermore,
And his commanded word
A thousand generations to
He doth in mind record.
9 The covenant which he before
Did unto Abr'ham make:
And unto Isaac afterward
Likewise an oath did take/


10 And unto Jacob for a law
He did confirm it fast;
To Ifr'el for a covenant
That evermore should last.
11 I'll surely give thee Canaan's land
To be thy lot, he said.
12 When they but few, yea very few,
And strangers in it stray'd.


13 When they did from one nation
Another pass unto:
When as they from one kingdom did
To other people go.
14 He suffer'd mone to do them wrong,
Yea kings for them check'd he.
15 Touch ye not mine anointed ones,
My prophets harm not ye.
16 He call'd for famine on the land,
He brake the staff of bread.
17 Before them sent one whom they sold
Joseph a slave was made.


18 Whose feet they did with fetters hurt,
He did in irons lie,
19 Until the time his word did come*,
The Lord's word did him try.
20 The king, the peoples ruler sent,
Loos'd him and let him go.
2i He made him lord of all his house,
Of all's wealth ruler too.


22 That he his noble peers might bind
According to his will;
And that into his senators
He wisdom might instil.
23 Then also into Egypt land
His father Ifra'l came:
And Jacob was a sojourner
Within the land of Ham.


24 He much increas'd his folk, and made
Them than their foes more strong.
25 Their heart he turn'd his folk to hate,
To do his servants wrong.


26 His servant Moses he did send,
And Aaron whom he chose.
27 His signs and wonders them among
They in Ham's land disclose.
28 He darkness sent, and made it dark,
Nor did they 's word gainsay.
29 He turn'd their waters into blood,
And he their fish did slay.


30 Great store of frogs their land bro't forth
In chambers of their kings.
31 He spake, there came flies swarms, and lice
In all their coast he brings.
32 He gave them hail for rain, and in
Their land fires flame did make.
33 Their vines and fig-trees smote and thro'
Their coast the trees he brake.


34 He spake, and then the locusts forth
And caterpillars came,
In multitudes of armies, so
That none could number them.
35 All their land's herbs they eat, and fruit
Did of their ground devour.
36 All first-born in their land he smote,
The chief of all their pow'r.


37 He also thence did bring them forth
With silver and with gold
And there was not among their tribes
A feeble person told,
38 At their out-going Egypt joy'd,
For on them fell their dread:
39 A cloud for cov'ring, and a fire
To light the night he spread.


46 They ask'd, and he brought quails, with bread
He fill'd them from the sky.
41 He clave the rock, and water flow'd,
Floods ran in places dry.
42 For on his holy promise he,
And servant Abram thought
43 With joy his people and with songs
Forth he his chosen brought.


44 He of the heathen people did
The land on them bestow;
The labour of the people they
Inherited also.
45 To this great end, that so they might
His statutes keep always,
And that they might his laws observe:
Therefore Jehovah praise.


Source: The Psalms, Hymns, and Spiritual Songs of the Old and New-Testament: faithfully translated into English metre: for the use, edification, and comfort of the saints...especially in New-England (25th ed) #PCV 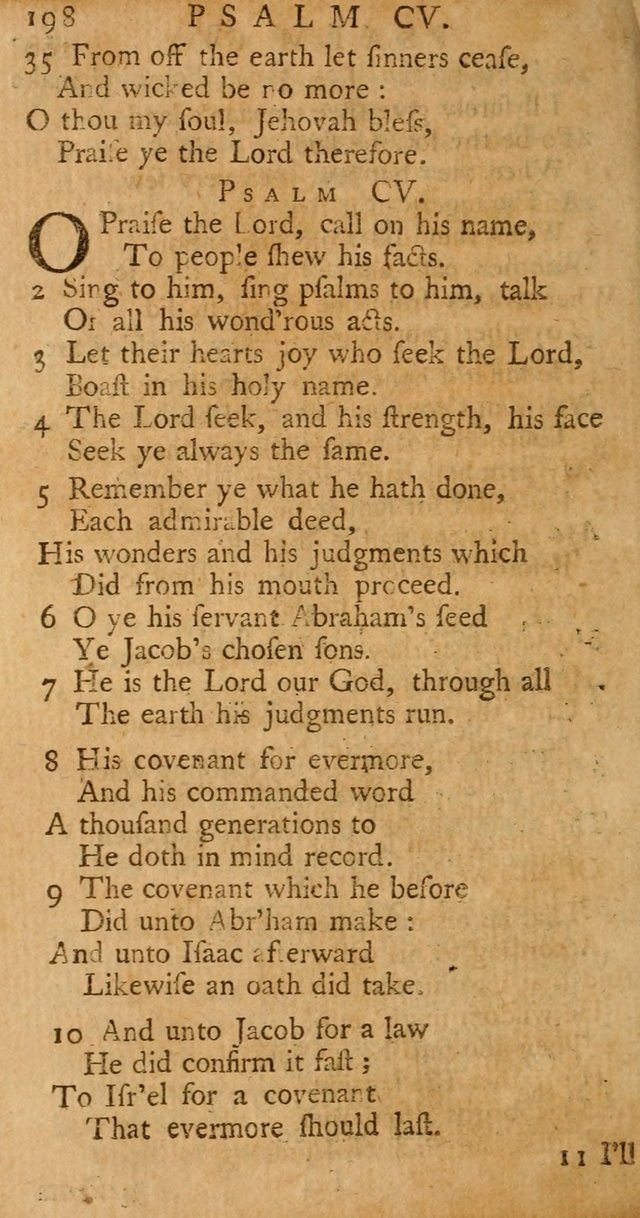 View Page
The Psalms, Hymns, and Spiritual Songs of the Old and New-Testament: faithfully translated into English metre: for the use, edification, and comfort of the saints...especially in New-England (25th ed) (1742), p.206
^ top

The Psalms, Hymns, and Spiritual Songs of the Old and New-Testament #PCV