Praise ye the Lord, give thanks to him 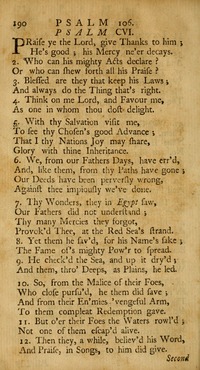 Praise ye the Lord, give thanks to him

1. Praise ye the Lord, give thanks to him;
He's good; his mercy ne'er decays.
2. Who can his mighty acts declare?
Or who can show forth all his praise?
3. Blessed are they that keep his laws;
And always do the thing that's right.
4. Think on me Lord, and favor me,
As one in whom thou dost delight.


5. With thy salvation visit me,
To see thy chosen's good advance;
That I thy nations joy may share,
Glory with thine inheritance.
6. We, from our father's days, have erred,
And, like them, from thy paths have gone;
Our deeds have been perversely wrong,
Against thee impiously we've done.


7. Thy wonders, they in Egypt saw,
Our fathers did not understand;
Thy many mercies they forgot,
Provoked thee, at the Red Sea's strand.
8. Yet them he saved, for his name's sake;
The fame of his mighty power to spread,
9. He checked the sea, and up it dried;
And them, through deeps, as plains, he led.


10. So, from the malice of their foes,
Who close pursued, he them did save;
And from their enemies vengeful arm,
To them complete redemption gave.
11. But o'er their foes the waters rowled;
Not one of them escaped alive.
12. Then they, a while, believed his word,
And praise, in songs, to him did give.


13. Bat soon they all his works forgot;
Nor would they for his counsel wait.
14. They lusted in the wilderness;
And tempted God, by asking meat.
15. He granted their too rash request;
But leanness in their soul was thrown.
16. They envied Moses in the camp,
And Aaron God's choice holy one.


1 7. The gaping earth Dathan devoured;
Closed on Abiram's, factious crew.
18. The fire on their companions seized;
The Flame their bold abettors slew.
19. Then they a calf, in Horeb made;
And did the idol homage pay:
20. Their glory, to the likeness, changed
Of a dull ox, that eateth hay.


21. Their God, and Savior, they forgot;
Who had, in Egypt great things done:
22. Wrought wonders, in the land of Ham;
His terrors, by the Red Sea, shown.
23. He said, he would destroy them quite;
But Moses, then, before him stood.
And filled the breach, to turn his wrath;
Lest he his threatening should make good.


24. Yea; they the pleasant land despised;
And gave no credit to his word:
25. But murmured in their tents; nor heard
The voice of their most gracious Lord.
26. Then sware he, there, they ne'er should come;
But perish in the desert sands:
27. Nations should prey upon their seed,
And scatter them in distant lands.


28. Yea, they to Baal-Peor joined;
And eat the offerings of the dead.
29. These works did so provoke his wrath,
The dreadful plague among them spread.
30. Then Phineas rose, and judgment wrought;
The plague was stayed, the guilty slain.
31. This justice was in him esteemed;
His race the high rewards did gain.


32. They angered him, at Meribah;
That Moses suffered for their sake.
33. For they his spirit so provoked,
With unadvised lips he spake.
34. The nations they did not destroy;
As God had given them command.
35. But mingled with the heathen were,
And learned the manners of their land.


36. Yea, their vain idol gods they served;
Which them, in woeful mischief, snared.
37. In sacrifice to demons, they,
Their offspring, cruelly prepared.
38. And guiltless blood they shed; the blood
Of their own sons, and daughters, slain
In sacrifice to Canaan's gods;
The gore did the whole land distain.


39. Thus greatly were their souls defiled,
While they on their own works were bent;
After their own inventions, they,
With lustful hearts, a whoring went.


40. For this, against his people, flamed.
The indignation of the Lord;
That those who, his inheritance,
Before had been, he now abhorred.
41. He gave them up to heathen powers;
Their haters ruled with rods of Sseel.
42. Their foes then greatly them oppressed;
And made them subject to their will.


43. He saved them oft, but they as oft.
Through their bad counsels, did rebel,
And moved his wrath; until, beneath
The weight of their own crimes, they fell.
44. Yet, in the time of their distress,
His kind regards to them were shown;
His bowels with compassion moved.
When e'er he heard their piteous moan.


45. His covenant he recalled to mind;
In his great goodness did relent.
46. He made them pitied be of all,
Where they, as captives had been sent.
47. Now save thou us, O Lord, our God,
And from among the heathen bring;
That we may thank thine holy name,
And songs of praises to thee sing.


48. Blessed be Jehovah, Israel's God,
Eternally; with one accord,
Let all the people hearty join,
And say, Amen. Praise ye the Lord. 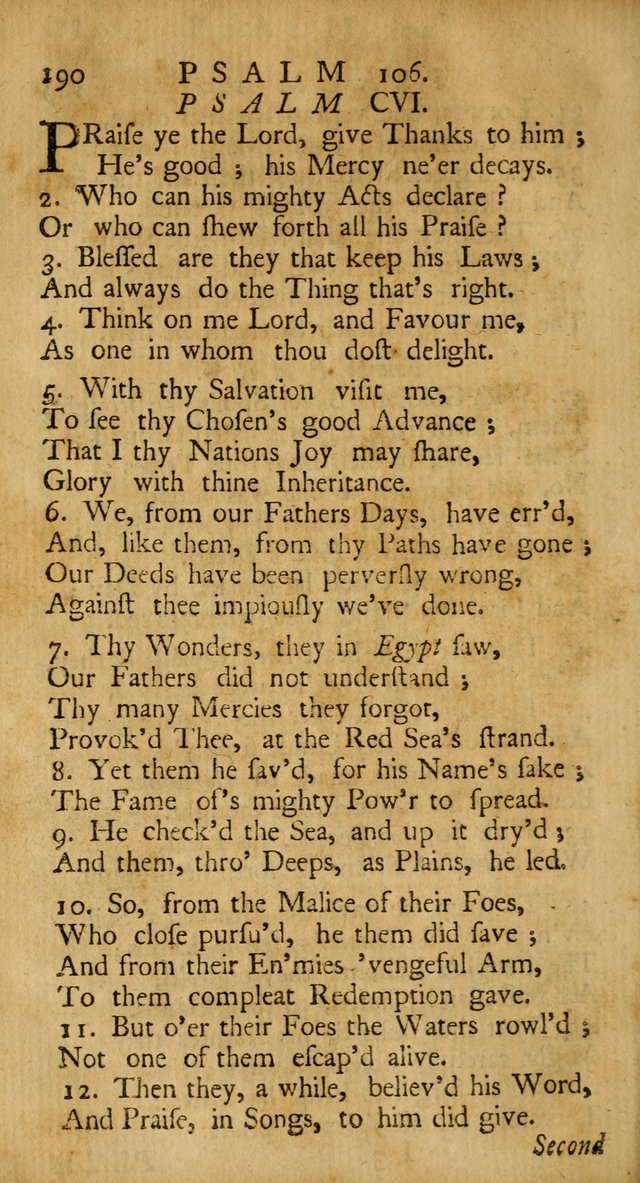 View Page
A New Version of the Psalms of David: Fitted to the Tunes Used in the Churches, With Several Hymns Out of the Old, and New, Testament (1752), p.201
^ top

A New Version of the Psalms of David #190