Soul of Jesus, make me holy 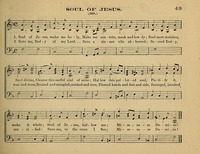 Soul of Jesus, make me holy

Anima Christi sanctifica me. [Holy Communion.] The author of this hymn is unknown, and the earliest date to which it has been assigned is the 14th century. It is found in the very rare Heures a Lusage de Lengres. Imprimé a Troyes chez Jean le Coq, without year or pagination. It is also in the Hortulus Animate, Lyons, 1516; and 1519; Rambach, i. p. 360, and Daniel, i., No. 498.
In the last it is included among the hymns written by unknown authors, before the 16th century, and not inserted by authority in the Offices of any Breviary or Missal. Daniel also gives an additional intercession from the Lengres Hours, which has been ascribed to Ignatius do Loyola. As he was born in 1491, and did not embrace a religious life until 1521, this ascription is certainly an error.

Translations in common use:--
2. Soul of Jesus, make me holy. This is a metrical paraphrase and expansion of the original in 60 lines. It appeared anonymously in the Old Porch, April, 1855, and passed through the Lyra Eucharistica, 1863, p. 106, into a few Roman Catholic Collections for Schools and Missions, but usually in an abbreviated form. Given in the Irvingite Hymns for the Use of the Churches, 2nd ed., 1871, No. 301, as "Heart of Jesus, make me holy," and is there attributed to "J. W. Chadwick." Chadwick's, however, is the shorter form noted below. Another arrangement of this translation is, "Blood of Jesus; stream of life." No. 85 of Hymns for use at St. Ethelburga's, Bishopsgate, London, 1875. [Rev. James Mearns, M.A.] 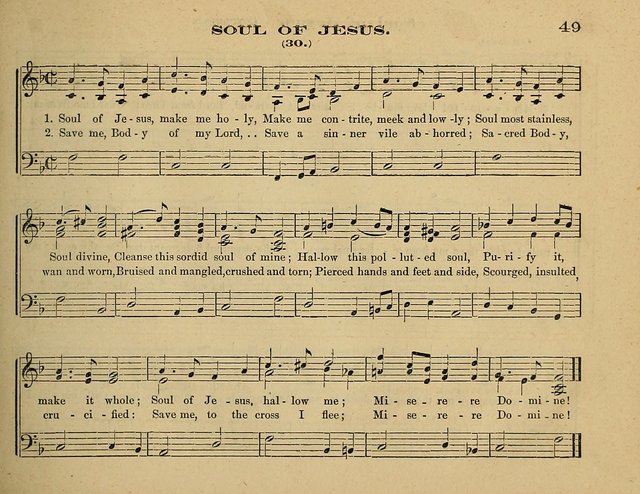 The Hymn Book of the New Sunday School Companion #d33