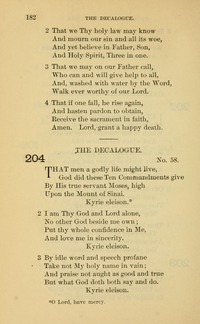 1 That men a godly life might live,
God did these Ten Commandments give
By His true servant Moses, high
Upon the Mount of Sinai.
Kyrie eleison.


2 I am Thy God and Lord alone,
No other God beside me own;
Put thy whole confidence in Me,
And love Me in sincerity.
Kyrie eleison.


3 By idle word and speech profae
Take not My holy name in vain;
And praise not aught as good and true
But what God doth both say and do.
Kyrie eleison.


4 Hallow the day which God hath blest,
That Thou and all Thy house may rest:
Keep hand and heart from labor free,
That God may have His work in Thee.
Kyrie eleison.


5 Give to thy parents honor due,
Be dutiful and loving too;
And help them when their strength decays;
Then God shall give thee length of days.
Kyrie eleison.


6 Harbor no hatred, nor ill will,
Lest hate breed anger, and thou kill;
Be patient and of gentle mood,
And to thine enemy do good.
Kyrie eleison.


7 Be faithful to thy marriage vows,
Thy heart give only to thy spouse;
Keep pure thy life, and lest thou sin,
Use temperance and discipline.
Kyrie eleison.


8 Steal not, oppressive acts abhor,
Nor wring their life-blood from the poor;
But open wide thy loving hand
To all the needy in the land.
Kyrie eleison.


9 Bear not false witness, nor belie
Thy neighbor by foul calumny;
Defend his innocence from blame,
And hide with charity his shame.
Kyrie eleison.


10 Thy neighbor's wife desire thou not,
His house, not aught that he hath got;
But wish that his such good may be,
As thine own heart doth wish for thee.
Kyrie eleison.


11 God these Commandments gave, therein
To show thee, son of man, thy sin,
And make thee also well perceive,
How unto God man ought to live.
Kyrie eleison.


12 Help us, Lord Jesus Christ, for we
A Mediator have in Thee;
Without Thy help our works are vain,
And merit only endless pain.
Kyrie eleison. 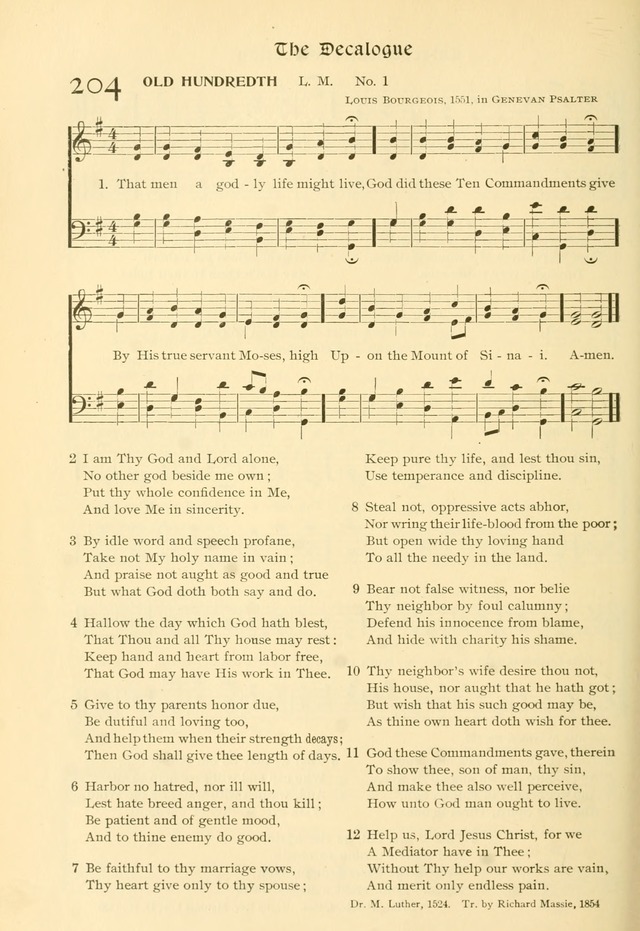