Veni Sancte Spiritus, Et emitte coelitus. Innocent III. (?). [Whitsuntide.] In annotating this beautiful Sequence we shall deal i. with its Merits, ii. with the manuscript in which it is contained, iii. with its Authorship, and iv. with the Variations in its Use.
i. Merits. The opinion of critics is unanimous in regarding this Sequence as one of the masterpieces of Latin sacred poetry. Olichtovaeus (Elucidatorium, Paris, 1516, f. 171), says of it:—

"Nor indeed, in my opinion, can this piece be sufficiently praised; for it is above all praise, whether by reason of its wonderful sweetness along with a most clear and flowing style, or by reason of its agreeable brevity along with wealth and profusion of ideas, especially as almost every line expresses one idea, or finally by reason of the elegant grace of its structure, in which things contrasted are set over against each other, and most aptly linked together. And I well believe that the author (whoever he was), when he composed this piece, had his soul transfused by a certain heavenly sweetness, by which, the Holy Spirit being its author, he uttered so much sweetness in so few words."

"The loveliest... of all the hymns in the whole circle of Latin sacred poetry," adding that it "could only have been composed by one who had been acquainted with many sorrows, an t also with many consolations."

In Mediaeval times it was often called the Golden Sequence. It is not indeed distinguished by great and absolute originality of idea, for in its leading thoughts it was clearly influenced by earlier pieces. But it combines a stately grace, a perfect rhythmic melody, and a faculty of saying just the right thing in just the fitting words, in such a measure as to disarm criticism, and at once to defy comparison with any other hymn in any other language, and to make it almost impossible to present an adequate translation. It is in five stanzas, each consisting of six lines of seven-syllable trochaic verse (trochaic dimeter catalectic).
ii. MSS. The manuscripts also show that this Sequence does not date from the earliest period of Sequence-writing. It is indeed found in four manuscripts at St. Gall, which, for the most part, date from the 11th century; but Herr Idtensohn, the librarian, having kindly examined these manuscripts, informs me that in no case is this Sequence in a hand earlier than the 13th century. He adds that it is "everywhere a piece inserted by another, later, hand than that of the ms. volume in general." This agrees with what we have otherwise observed. Up to the present time this sequence has not been found in any manuscript earlier than 1200.
iii. Authorship. Here critics are very far from being at one. The French tradition as a rule has not attempted to affix any author's name to the sequence. It has, however, by others been ascribed to a variety of authors, e. g. (1) to Robert II. of France, (2) to Hermannus Contractus, (3) to Archbishop Stephen Langton, and (4) to Pope Innocent III. The whole evidence as to authorship may be summed up thus. The Sequence is clearly not earlier than about the beginning of the 13th century. It is certainly neither by Robert II. nor by Hermannus Contractus. The most probable author is Innocent III.
iv. Use. As already stated the "Veni Sancte Spiritus" is not found in any of the very early Missals or Sequentiaries. When it began to come into use it did not at once displace the older Whitsuntide sequence, i.e. the "Sancti Spiritus adsit," for that continued, as a rule, to be used on Whitsunday up till the revision of the Roman Missal in 1568-70. Consequently the "Veni Sancte," though occasionally used on Whitsunday (as in the Breslau Missal of 1483), was almost universally appointed for use on one or more of the immediately succeeding week days.
Finally it had the honour of being chosen as one of the four sequences which were alone retained in the Roman Missal of 1570, and is there appointed for use on Whitsunday and also throughout the week, the text happily being left unaltered both at that time and at the subsequent revision under Urban VIII. (1634).

The Veni Sancte Spiritus, Et, has frequently been translated into German. Through two of these versions it has passed into English as follows:—
i. Heilger Geist, du Tröster mein. This is a full and good translation by Martin Moller, in his Meditationes sanctorum pat rum, Görlitz, 1584, where it is entitled "A very beautiful prayer to God the Holy Ghost;” and thence in Wackernagel, v. p. 55. Translated as:—
1. Holy Ghost! my Comforter. This is a full and very good translation from Bunsen by Miss Winkworth, in her Lyra Germanica, 1st Ser., 2nd ed., 1856, p. 103, and her Chorale Book for England, 1863 (with st. v. rewritten
2. Holy Comforter Divine. By Miss Borthwick, omitting st. ii., iv., vi., ix., as No. 97 in Dr. Pagenstecher's Collection, 1864.
Another translation is: "O Holy Ghost! Thou fire Divine." By Miss Winkworth, 1855, p. 103.
ii. Komm, o heil'ger Geist, und wehe. By Cardinal Melchior von Diepenbrock. Translated as "Come, O Holy Ghost, and breathe." By J. Kelly, in his Hymns of the Present Century from the German, 1885, p. 69. [Rev. James Mearns, M.A.] 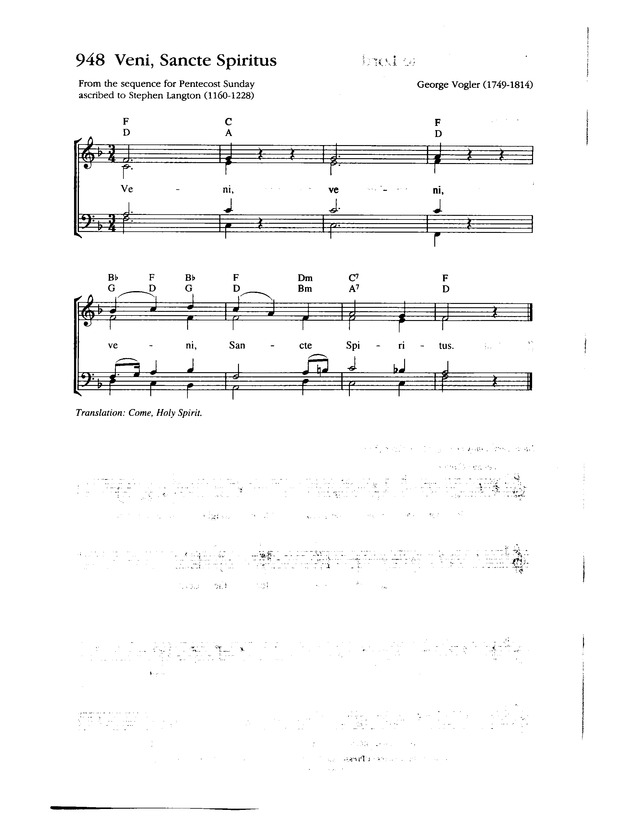