1 When peace like a river attendeth my way,
when sorrows like sea billows roll;
whatever my lot, thou hast taught me to say,
"It is well, it is well with my soul."


2 Though Satan should buffet, though trials should come,
let this blest assurance control:
that Christ has regarded my helpless estate,
and has shed his own blood for my soul. Refrain


3 My sin oh, the bliss of this glorious thought!
my sin, not in part, but the whole,
is nailed to the cross, and I bear it no more;
praise the Lord, praise the Lord, O my soul! Refrain


4 O Lord, haste the day when my faith shall be sight,
the clouds be rolled back as a scroll;
the trump shall resound and the Lord shall descend;
even so, it is well with my soul. Refrain 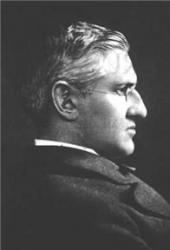 Late in 1873 Horatio G. Spafford (b. North Troy, NY, 1828; d. Jerusalem, 1888) and his family were scheduled to travel from the United States to Europe. Delayed by pressing business, Spafford sent his wife and daughters ahead on the French liner Ville du Havre. The ship collided with the English ship Lochearn on November 22 and sank in just twelve minutes. Spafford's wife was saved, but his daughters perished. After arriving in Wales, Mrs. Spafford cabled her husband, "Saved alone." Spafford then left by boat to meet her. Near the tragic scene on the high seas he wrote this text. Upon hearing the news, evangelist Dwight L. Moody, a friend of the Spaffords, traveled to England to comfort them. He reported that Spafford said about the tragic event, "It is well; the will of God be done." Philip P. Bliss, another family friend, wrote the tune for Spafford's text. Both text and tune were published in Gospel Hymns No. 2 (1876), a hymnal compiled by Ira D. Sankey (PHH 73) and Bliss.

The text conveys a sense of trust and ultimate peace with God's plan for our lives. Even in the face of "sorrows" and Satan's temptations, the Christian believes "it is well with my soul" (st. 1-2). That experience of trust and peace derives from knowing with certainty that Christ has paid the penalty for "my sin, not in part, but the whole" (st. 3).The final stanza affirms that it will also be "well with my soul" on the great day of Christ's return. This hymn has brought comfort to many Christians.

In 1856, several years before writing this text, Spafford had moved to Chicago, Illinois, where he established a law practice and became a professor of medical jurisprudence at Lind University (now the Chicago Medical College). Active in the YMCA and as a Sunday school teacher, he served as director and trustee for the Presbyterian Theological Seminary of the Northwest in Chicago. Spafford became acquainted with Dr. Piazza Smith, a Scottish astronomer, and through him became interested in biblical archeology. Heavy losses in the Chicago fire of 1871, the death of his four daughters in 1873, and the death of his son in 1880 caused Spafford to be accused of some secret sin by uncharitable church members. In 1881 he, his wife, and some friends moved to Jerusalem and founded an American colony there; the family's story was told by another daughter, Bertha Spafford Vester, in Our Jerusalem.

Liturgical Use:
As a testimonial hymn, often after tragic events, when we want to confess our faith in God's providence even when we don't understand the "whys" of life.

The gospel tune by Philip Bliss (PHH 482) was named after the ship on which his friends died; VILLE DU HAVRE (also called IT IS WELL) is best sung in harmony throughout. The refrain may be sung only once–after stanza 4 as a final testimony. Use a moderate organ accompaniment to support confident s…

All tunes published with 'When Peace, Like a River'^ top

In November, 1873, Horatio Spafford sent his wife and four daughters on the French ship Ville du Havre from their home in Chicago to a vacation in France, planning to set out a few days later himself. Somewhere in the Atlantic, the Ville du Havre collided with a British ship coming the other way, and sank in just 12 minutes. Of his family, only Spafford’s wife survived. Spafford took the next boat over, and as he passed the spot where the ship went down, began to write, “When peace like a river attendeth my way, when sorrows like sea billows roll,” and continued until he had the text, “It is well with my soul.” His good friend, Philip Bliss, composed the tune for his words, naming it after the ship, VILLE DU HAVRE. In this hymn, Spafford has given all of us words of comfort and assurance in times of physical and spiritual crisis, paraphrasing those familiar words of Julian of Norwich: “And all shall be well, and all shall be well, and all manner of things shall be well.”

Almost every hymnal keeps the original four verses and refrain unaltered. While the first stanza seems fairly autobiographical of the tragedy at sea (“when sorrows like sea billows roll”), as a whole, the text speaks to our assurance of hope in the midst of all trials. It acknowledges that both our earthly trials and spiritual sorrows are not far and removed from each other, but that through the suffering of Christ and the power of the cross, all of our own sufferings, spiritual, emotional, and physical, will one day be removed.

Perhaps what is most startling about this text is the first line: “When peace like a river attendeth my way.” What does that mean, “peace like a river?” Lisa McKay addresses the question beautifully when she says, “I used to think of peace primarily as a stillness – a pause, a silence, a clarity – but that sort of peace is not the peace of rivers. There is a majestic, hushed sort of calm to rivers, but they are not silent and they are certainly not still – even the most placid of rivers is going somewhere…I’ve stopped expecting peace to look like the pristine silence that follows a midnight snowfall. I’m coming to appreciate a different sort of peace instead – a peace that pushes forward, rich with mud, swelling and splashing and alive with the music of water meeting rock.” (McKay, “Peace Like a River,” rachelheldevans.com)

The tune VILLE DU HAVRE is the only one used with this text, which is fitting given the personal nature of the connection between text and tune. It’s possible for this to become an unfriendly tune for a congregation pitch-wise, so be careful about what key you use. It’s most reasonable in the key of C – Bb might be just a bit too low, and Db just a bit too high.

This is a hymn to be sung amidst the “Whys” of life. It is a testimony of our faith, even during tragedies and loss. It’s also a hymn of comfort, soothing the soul and reminding us of our peace in Christ. You could pair it with the hymn, “Jesus, I Come,” “Desert Song,” “Blessed Be Your Name,” or other responses of faith and declarations of trust. 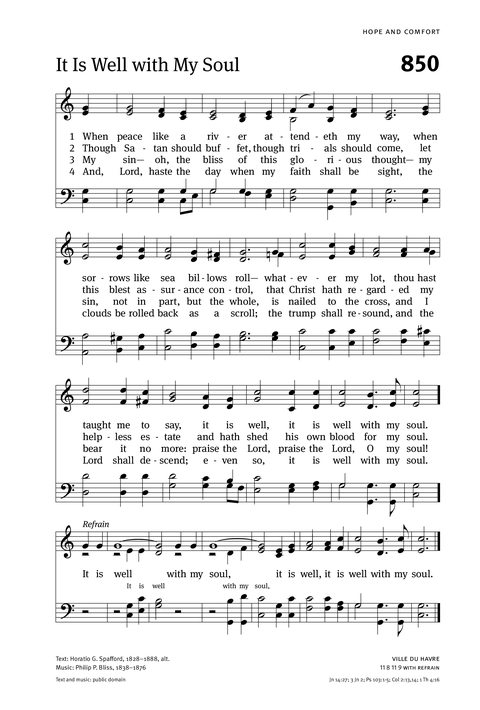 Hymns for a Pilgrim People #390

Hymns of the Christian Life #300

Display Title: It is well, with my soul First Line: When peace, like a river, attendeth my way Author: Horatio Gates Spafford Date: 1992
Hymns of the Christian Life #300

Sacred Selections for the Church #561

Display Title: It is well with my soul First Line: When peace, like a river, attendeth my way Author: H. G. Spafford Date: 2012
The Baptist Hymnal #509

Display Title: It Is Well with My Soul First Line: When peace, like a river, attendeth my way Tune Title: VILLE DU HAVRE Author: Horatio Gates Spafford
The Cyber Hymnal #3106

Display Title: It is Well With My Soul First Line: When peace, like a river, attendeth Date: 2012
The Family Hymnal #16

The Hymnal for Worship and Celebration #493

The Song Book of the Salvation Army #771

Display Title: It is well, is well with my soul First Line: When peace like a river attendeth my way Author: Horatio Gates Spafford (1828-88) Date: 1986 Subject: The salvation soldier | Faith and trust
The Song Book of the Salvation Army #771