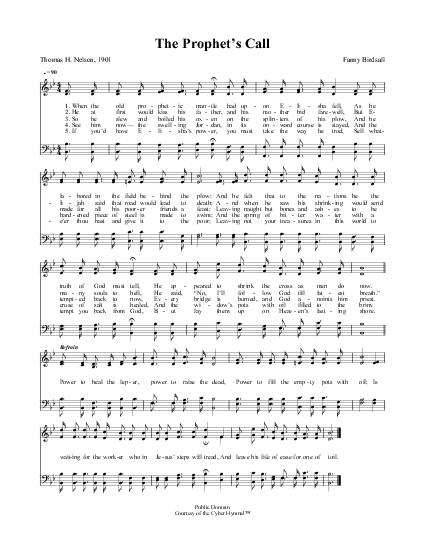 When the old prophetic mantle had upon Elisha fell

1 When the old prophetic mantle
Had upon Elisha fell,
As he labored in the field behind the plow;
And he felt that to the nations
He the truth of God must tell,
He appeared to shrink the cross as men do now.


Refrain:
Power to heal the leper, power to raise the dead,
Power to fill the empty pots with oil;
Is waiting for the worker
Who in Jesus’ steps will tread,
And leave his life of ease for one of toil.


2 He at first would kiss his father,
And his mother bid farewell,
But Elijah said that road would lead to death;
And when he saw his shrinking
Would send many souls to hell,
He said, No, I’ll follow God till latest breath. [Refrain]


3 So he slew and boiled his oxen
On the splinters of his plow,
And he made for all his poorer friends a feast;
Leaving naught but bones and ashes
To be tempted back to now,
Every bridge is burned,
And God anoints him priest. [Refrain]


4 See him now—the swelling Jordan,
In its onward course is stayed,
And the hardened piece of steel is made to swim;
And the spring of bitter water
With a cruse of salt is healed,
And the widow’s pots with oil filled to the brim. [Refrain]


5 If you’d have Elisha’s power,
You must take the way he trod,
Sell whate’er thou hast and give it to the poor;
Leaving not your treasures in this world
To tempt you back from God,
But lay them up on Heaven’s lasting shore. [Refrain]

[When the old prophetic mantle had upon Elisha fell]

All tunes published with 'The Prophet's Call'^ top 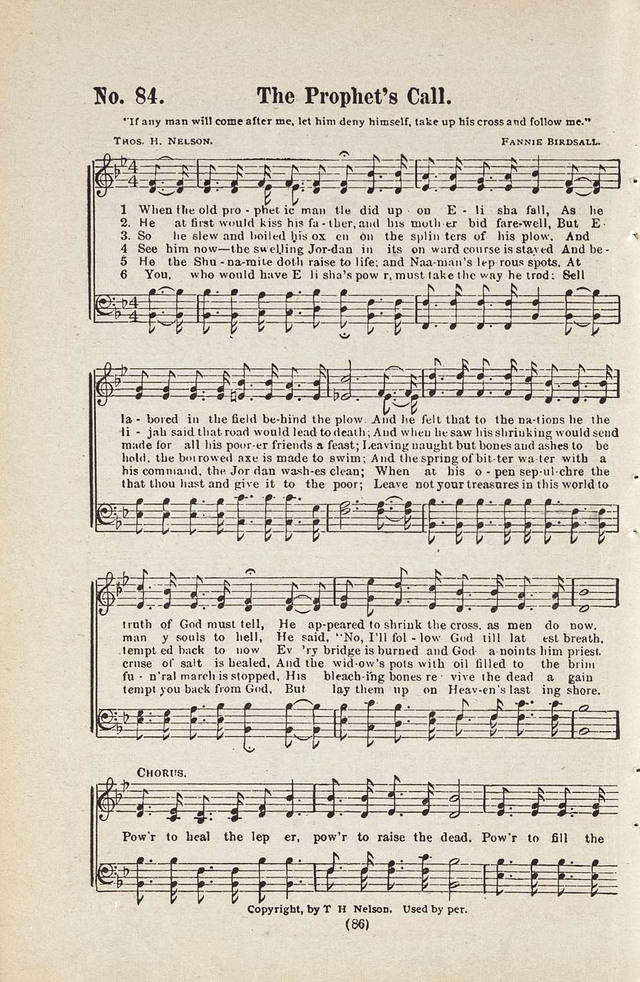